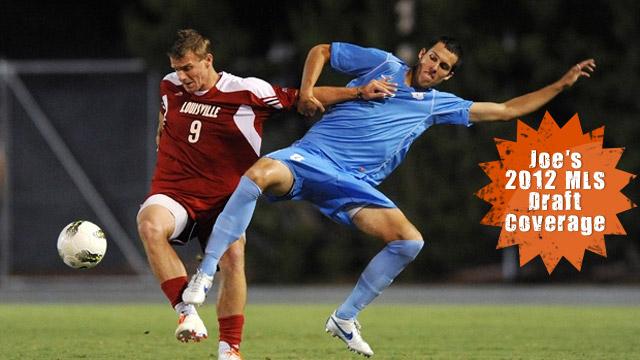 **Please note that this is the opinion of Joe Mauceri. More opinions from other TopDrawerSoccer.com writers will be released as the draft nears. **

After watching 120 live college soccer games this year, supplemented by another 63 games on tape, composed of 151 different college teams, here is my Final 2012 MLS Draft Ranking.

Players that I haven't seen are generally ranked lower than players that I have seen. I'm from the East coast - so it's easier for me to see teams in the East. However, I've seen UC Irvine, UC Davis, UC Riverside, Creighton, SMU, Bradley, UCSB (3 times), Denver, New Mexico (twice), California, Bakersfield, San Jose State, Stanford, San Diego State, Washington (twice), UCLA (twice) and Drake live. I was unable to see some teams live, I've only seen on tape (e.g., Michigan State, Ohio State, UAB, Hofstra, Iona). I've reviewed a lot of tape (including the South American U20 qualification tournament. The combine will supplement my prior observations and fill the gaps where needed. I've seen every domestic combine college play live with the vast majority in 2011 and a handful in 2010.

My rankings take into account the values of Generation Adidas, international status and general assessment of the skill and how each player might fit into a MLS team. Given the 3 expansion teams in the past 2 years and the roster increase, I've made slight grade inflation and I'm considering the players with a grade of C+ have increased chances of making a roster and some of the players with higher C rankings may be able to stick, as well.

In addition to ranking each player sequentially, I'm assigning a letter grade using the following scale:

A=Can't miss prospect. Should easily make the roster and may get time with the first team in 2012. By the end of the year, could be an impact player.

B=Likely to make the team. Could make roster, may take a year or more to get to the first team.

C=Probably not going to make the team. Has significant barriers to overcome. A very select few may eventually make it, but it would need to be a perfect storm (multiple injuries, playing out of their heads, fortuitous bounces, etc.).

D=Extremely unlikely to make a team.

Within each grade, I've ranked each player.