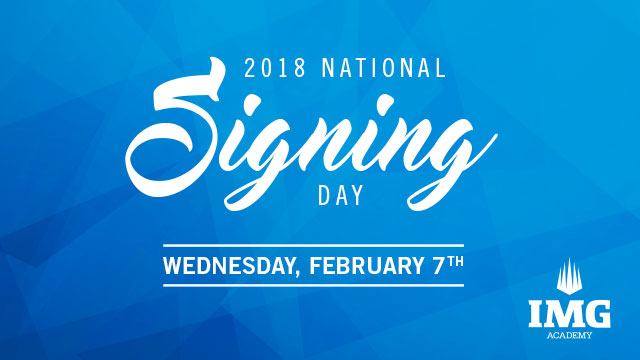 The 2018 edition of National Signing Day is here, and for this year's senior class, a chance to make it official.

Once again, TopDrawerSoccer.com offers up peerless coverage of Signing Day for college soccer. With an up-to-the-minute liveblog coverage, a photo gallery and social media offerings, there will be plenty to track on Wednesday.

First up, if you are a senior taking part on Wednesday's activities, please submit any photos or information to editor@topdrawersoccer.com. Those will be posted on the day -- and throughout the subsequent week -- on the photo gallery.

Follow along with the links and live updates (on Wednesday) below.

7:21 am: The day is here! Obviously there is not much in terms of suspense when it comes to college soccer's Signing Day. But there were two recruits that committed for the fall the night before. No. 21 recruit Johan Penaranda tweeted his verbal commitment to Pittsburgh yesterday, while No. 87 ranked recruit Ibrahima Diop committed to Connecticut.

7:46 am: It's never too early to get things started, as some schools host Signing Day Events before the day begins. A couple of players in New Jersey, from Match Fit Academy, are Division I-bound.

8:50 am: While programs start to announce the addition of new players, don't forget to send us your photos to editor@topdrawersoccer.com for our Signing Day photo gallery (coming soon).

9:08 am: National Signing Day is a big deal in the state of Texas, but it's not just for football. Both Texas Tech and Baylor have started to announce their respective signees on Twitter, getting a jump on some of the other programs.

9:23 am: Early days here still, but the Signing Day photo gallery is now live. Check it out.

Join us in welcoming Cassandra Hiatt to the Red Raider family! #WreckEm pic.twitter.com/L2bBqQdJTE

9:46 am: The first international recruits have been spotted. Frano Buhovac (Bosnia and Herzegovina) is heading to the South Carolina men's soccer program. Barbi Zagonyi (Hungary) is joining Oklahoma State.

9:51 am: While the Notre Dame women's program is still searching for a head coach, Nikki Colantuono is the first player to submit her NLI to join the program this year.

10:10 am: The No. 28 ranked recruit from the Girls IMG Academy Top 150 is officially on her way to Ohio State. Emaly Vatne brings plenty of quality and pedigree to the Buckeyes, from top club Michigan Hawks.

10:30 am: Players from north of the border can make a decisive impact in the women's (or men's) college game. One of those looking to emerge this year is Samantha Chang, who earned the League One Ontario's Young Player of the Year competing for Unionville Milliken SC. She will play for South Carolina, the program just confirmed.

10:43 am: Speaking of Canada, Syracuse just announced its first addition on Signing Day, Hilli Goldhar from Sigma FC. Known for producing the likes of Cyle Larin and Richie Laryea. Head coach Ian McIntyre provides his scouting report, while the Ontario native has a highlight reel you can check out.

11:03 am: The bulk of the 2017 U.S. U17 Men's National Team that went to last year's World Cup is heading to the professional ranks, competing for minutes already this year. One of the expections is Alexander Budnik. The Sockers FC goalkeeper is on his way to Dartmouth, as confirmed by his Signing Day snap.

11:15 am: Another Top 150 recruit has been confirmed. Michigan -- another DI program on the lookout for a new head coach -- announces the signing of Meredith Haakenson, the No. 36 ranked player in the class.

11:45 am: Possibly the first program to put out an official release is Baylor, which was active early on Signing Day. A smaller class of four players is heading to the Big 12 school this year.

11:51 am: Jordan Brewster, the No. 11 ranked player for 2018, has been announced as part of West Virginia's class. The forward, who can also play as an outside back, was part of the U.S. U20 WNT roster for last year's Nike Friendlies.

A North Canton, Ohio, native, Jordan currently plays for the U.S. Women's U-20 Team and has been a part of the youth national system since 2013! pic.twitter.com/nB6IHjSN3t

12:00 pm: Duke is coming off a strong season in 2017, returning to the NCAA Tournament before bowing out on penalty kicks against Fordham. A solid class is expected to come in, which includes Ian Murphy. The No. 53 ranked player in the class was just announced, as the California native is set to swap coasts to begin his career.

12:10 pm: One of the biggest transfers in men's Division I soccer is Kevin Silva, moving from UCLA to Rutgers. It was announced ahead of Signing Day, although the program's Twitter account was quick to point it out again today.

12:26 pm: Another intriguing Big Ten commitment is now official. Ben Yeagley, son of head coach Todd Yeagley, will join Indiana this year after a standout career at Bloomington South High School. Last year's freshman class had a huge impact for the national runners up, and the 2018 crop will hope to do the same.

12:51 pm: Official announcements are starting to trickle out as the day progresses. Colorado, High Point (women) and Kennesaw State have unveiled their full crop of signees.

1:11 pm: A player with plenty of soccer pedigree, Lily Harkes is part of Elon's 2018 recruiting class. Her father, John, played for the U.S. Men's National Team, her brother Ian starred at Wake Forest and her sister Lauren currently plays for Clemson.

Excited to welcome our next signee to the #Elon family, Lily Harkes! #EUWS #ElonSigns pic.twitter.com/fCHUuUBo4a

1:21 pm: With Grant Lillard leaving Indiana, the Hoosiers were going to have a big piece at the back to help replace the central defender. Jack Maher, just announced as the third recruit for 2018, is a big piece in that regard. The No. 25 recruit in the class, Maher recently joined the St. Louis FC USL team on an amateur contract, where he will pick up valuable appearance before enrolling at IU.

1:38 pm: Sticking with another Big Ten men's program, Farai Mutatu is another player that should come in right away and contribute as a freshman. The Crew SC Academy Wolves product is off to Michigan State.

Another local product joining the Spartans is @FaraiMutatu! Farai is one of the top strikers in the nation and is from Okemos, MI & the CSA Wolves Academy! #GoGreen #NSD18 pic.twitter.com/mBNun3xoGZ

2:03 pm: The recent success of the Mexican U20 WNT at the CONCACAF Championship won't have a huge impact on the class of 2018 (although some of the players involved are heading to college this fall). However, it's a reminder of how far the program has come, and some of the players in the Mexico youth setup are joining college programs this fall. That includes Reyna Reyes from FC Dallas, who is off to Alabama. A veteran of the U17s, other Mexican youth internationals committed include Mia Villegas (San Francisco) and Maricarmen Reyes (UCLA).

2:59 pm: While it will be a long time before all of the Division I recruiting class announcements are out, don't forget to check out the men's and women's announcements pages, which will be updated today and throughout 2018.

3:47 pm: Rachel Jones, the No. 8 ranked player in the class, has made it official by signing her NLI to join North Carolina. Is this the year the Tar Heels make it back to the top of the women's game?

4:30 pm: Most of the college talent that takes the club road to college goes via the Development Academy. But there are still players out there that can come in from other leagues or teams and make a difference. Georgetown signee Luke Kiley will aim to do that this fall, as the No. 31 ranked recruit heads to the Hilltop.

Welcome to the Hilltop Luke Kiley!

“Signing for Georgetown is a big step forward in my soccer career as well as my life. I get to play the sport I love for four more years and study at one of the best institutions in the country.”#HoyaSaxa #NationalSigningDay #Classof 2022 pic.twitter.com/oGD04BSB3R

4:35 pm: Arturo Vasquez was part of the 2017 U.S. U17 MNT World Cup cycle. But a late injury knocked him out of contention for the trip to India. The No. 19 recruit in the class is on his way to UCLA, the program just confirmed.

5:02 pm: Another international signing is on her way to Division I women's soccer. Oklahoma(w) has confirmed the addition of Olivia Smith, from Chelsea Ladies and an England youth international.

We went across the pond to find this next signee!

All the way from England, welcome Olivia Smith to the Sooner family! pic.twitter.com/0CtjQMCrS6

5:05 pm: After spending part of preseason with the LA Galaxy first team, Academy defender Jake Arteaga has been announced as part of Portland's 2018 recruiting class. Arteaga -- should he make it to campus -- could be one of the best first-year difference makers in 2018.

6:38 pm: News doesn't often break on Signing Day (in most cases it's either before or after). But a couple of prominent recruits had commitments confirmed. Jeremy Rafanello, the No. 81 ranked player in the class, will head to Penn State after announcing his decision on Twitter. And another U.S. U17 MNT player, Justin Garces, is on his way to Westwood in the fall. Of course, both players have to actually make it there later in the year.

7:13 pm: Signing Day festivities may be coming to a close on the East Coast, though things continue out west. One of the premier clubs in California, San Diego Surf, is sending an impressive senior group to women's soccer powers. That includes Bianca Caetano-Ferrara (Stanford), Logan Wells (USC), Ruby Hellstrom (Washington), Trinity Watson (Pepperdine) and Layla McFarland (Pepperdine) to name just a few. A handful of the seniors are pictured below. 8:30 pm: Time to put a bow on the day. Congrats to all the seniors, and best of luck on the next step of the soccer journey. Remember to check out the Signing Day photo gallery, which will be updated until the end of the week. If you haven't already, send your photo to editor@topdrawersoccer.com.