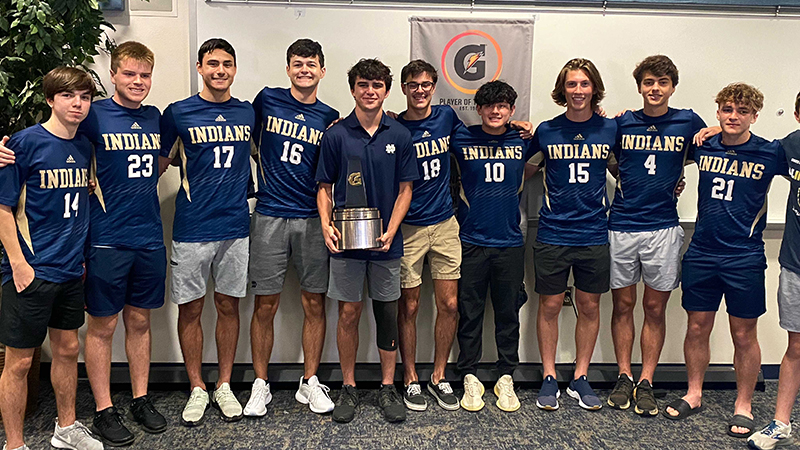 Ever since their freshman year at Keller High School in Texas, Bryce Boneau and his teammates dreamed about a big senior season.

The linchpin of a talented Keller squad during the 2020-21 campaign, it came together for one of the best seasons in school history. And it earned Boneau the distinction of the Boys National High School Player of the Year from Gatorade on Thursday.

A Notre Dame signee, Boneau finished his senior season (injuries and club obligations limited him in previous campaigns) with 18 goals and 19 assists, leading his side to a 17-3 record, and all the way to the Conference 6A, Region 1 tournament semifinals – farther than any other team in Keller history.

“I think we had a really talented team so my job was pretty easy, just to connect the team together, I had a bunch of talented guys around me who helped out,” Boneau told TopDrawerSoccer after earning the award.

The journey towards this season began for Boneau in his first year at Keller. With his club team Solar not competing in the Development Academy for his age group, Boneau got to know his class at Keller – even though he was injured and limited that season, as he suffered a hip fracture before his first preseason game.

“Being around those guys and the environment, representing the city, somewhat, is a cool feeling, and I knew after my freshman year, being with those guys I knew I would want to come back and play again,” he said.

But with an eye on maximizing his exposure to college coaches, Boneau suited up for Solar SC during the 2018-19 Development Academy season as a sophomore. While that meant he couldn’t play for Keller, he was part of something special that season. His U16/17 team captured the DA national title that year, with Boneau making 24 appearances.

Boneau felt that playing both Development Academy ball and in high school helped him grow in valuable ways.

“It developed both sides of my game,” he said. “With DA, I think anybody will tell you if you play DA in high school, it’s a higher level. It’s quicker, you practice more. In high school, I had the opportunity to become more of a leader. In DA I wasn’t really that. We had a bunch of really talented kids, kids who are now overseas. Those guys were the leaders and I don’t want to say I was a role player, but I wasn’t 'the guy,' I was a quality player on the team. But I think with high school, it gave me the opportunity to impose myself a little bit more, become more confident, and to lead, to develop that side of my game in addition to the technical side that the DA taught me.”

That fall, the midfielder returned to Solar SC as a junior. However, when the pandemic struck and the DA shutdown, Boneau had a chance to play back at Keller. A fractured tibia ended his season after the first game of district play.

As his final year at Keller approached, and already committed to Notre Dame, he was dead set on making it through this year.

“Senior year I knew I wanted to try to get in a full season of high school soccer,” he said. “This team is going to be special; we have very talented seniors, we were always talking about this in school.”

Back and in the mix with Keller, Boneau played a deep-lying role in central midfield. With a modest confidence and determination, he embraced a leadership role and had a massive season. Despite his team falling short of a spot in the regional final, it was the furthest a team from Keller had gone in the postseason. And the accolades started to roll in for Boneau. Named the Offensive Player of the Year by The Dallas Morning News, he was a Conference 6A First Team All-State selection as well.

Unfortunately, another injury ended his season. Playing in this year's Dallas Cup, Boneau suffered a torn ACL, sprained MCL and torn meniscus and missed Keller's season-ending loss according to The Dallas Morning News. He'll likely have to redshirt this fall at Notre Dame.

Despite the setback, he was in a self-describe state of shock after discovering his selection as the National Player of the Year, Boneau hinted at a similar feeling about even earning the state distinction. It’s something of uncharted territory for someone not used to being in the spotlight.

“This is a very different experience for me, being ‘the guy,’” he said. “It’s a little bit of a testament to the work I’ve put in, and also a testament to the people around me, who have made my job super easy: coaches, teammates, friends, family.”

Now, when he steps onto campus this fall in South Bend, people will know his name. Boneau is eager and excited for his next step, aiming to bring success and distinction with him to the ACC program.

“I’m excited to meet some new people, obviously Indiana is a long way from Texas, and it’s going to be a very different environment, but I’m excited to get up there and get to work with those guys,” he said. “Hopefully we can do something special up there too.”