Strong on the ball and tough in the tackle, New England Revolution Academy midfielder Guyllain Kabala won’t stray too far from home after recently signing to play for a 2014 College Cup team. 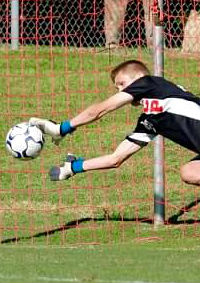 “[I] decided to commit to Providence because I like their program and I feel it's the right environment for me to grow as a player,” Kabala told TopDrawerSoccer.com.

The top-ranked recruit and former U.S. U17 MNT Residency player will be an instant hit in the Friar midfield. He’ll also be joined on the Providence side by a familiar face, as current club teammate Zach Herivaux is also committed to join the Big East side.

During his recruiting search, Kabala also felt that the soccer program would fit his approach to the game.

“I like their style of play and I feel it would benefit me as defensive midfielder giving me more freedom,” he said.

Eight players are verbally committed to join Providence this year.

McGovern is a local club product that has verbally committed to the 2016 Seahawks program, a decision that has been some time in the making.

“UNCW has been my first choice since I attended their summer and college ID camp in 2013,” he told TopDrawerSoccer.com. “I have made other college visits but the UNCW coaching staff and players are by far the most appealing to me. The campus has a student friendly setup and the local community is very supportive of the team.”

The shot-stopper’s academic ambitions lined up with his school choice. He plans on pursuing a degree in Exercise Science, a program that has earned an excellent reputation at UNC Wilmington.

Competing in the CAA, the soccer team’s improvement on an annual basis was another reason to make the commitment.

“The UNCW soccer program is getting better every year,” McGovern said. “Last season after beating UNC, Duke and two other top 25 teams during the regular season and after a hard loss to the eventual NCAA Champs Virginia in the tournament, it is easy to see why anyone in the country would want to play here.”

McGovern is UNCW’s second commitment for the class of 2016.

With the intent to pursue a business major and Spanish minor in college, Zach Pogue used that as a baseline while searching for the right soccer program.

Eventually finding the right balance between his intended academic avenue and a quality soccer team led Pogue to commit to the Division II program.

“Right now, the team is young and exciting, showing nothing but positive signs for winning in the future,” Pogue said about the soccer team. “After visiting other universities, I felt a brotherhood much stronger than other schools among the players on the team at Bellarmine. I have always had very likeable, charismatic coaches. I wanted to continue that tradition, and I got the feeling it would when communicating with coach Chastonay, coach Cannady, and their players.”

Class size was another element of the school that pulled him in.

“Bellarmine’s business program offers the majors I wish to study,” Pogue explained. “I learn better when I have more in class interaction instead of large lecture halls, and the 12:1 student to faculty ratio with the average class size being 20 students certainly helps. The campus life is awesome, with numerous clubs and activities always taking place. And the dorms are very accommodating.”