The starting left back on Capital Area Railhawks Academy, Huntley Munn didn’t have to look outside North Carolina for the right college fit. 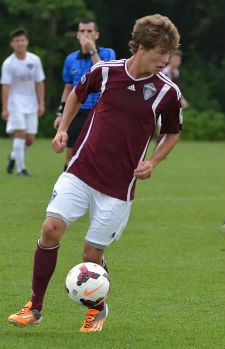 "I believe that the University of North Carolina Wilmington was the right place for me because it was close to home,” Munn told TopDrawerSoccer.com. “The academics and soccer program are both on the rise and that drew me in."

Prior to joining the Academy fold, Munn etched a standout high school soccer career for himself at C.E. Jordan, where he earned All Conference honors as a junior and senior.

A positive experience meeting the team also helped draw him to the CAA program.

"I've had the chance to meet the guys and find out what it was like to be an athlete at the university,” he said. “With the chance to be very good for years to come I couldn't be more excited about this opportunity to for this program.”

Eight players are committed to join UNCW in 2015.

The Carolina Rapids are quietly emerging as a pipeline to UNC Wilmington.

Goodrum is the second player who will join the CAA program in the next two seasons, where he’ll join 2015 graduate and current club teammate David Lozano in Wilmington.

“I felt that UNCW was the best fit for me with their soccer program and on the academic side because the program has proven that they are one of the best in the country after last season's NCAA tournament run,” Goodrum told TopDrawerSoccer.com. “The school has a very strong business program that I look forward to attending.”

The right midfielder was in talks with several schools after a playoff appearance last summer with Carolina’s U18s, and then visited a number of them, mostly in North Carolina.

Eventually, UNCW separated itself from the pack.

“After seeing Wilmington and getting to know the coaching staff and the other players, it was the obvious choice,” he said.

Goodrum is UNCW’s first commitment for the class of 2016.

A midfielder from the Atlanta region, a DIII power caught the attention of Garrett Shan, and he’ll head north in the fall to continue his playing career.

“OWU is a nationally ranked, top-notch program,” he told TopDrawerSoccer.com. “I am very happy with the staff and felt at home when I first visited the campus for summer camp this past July.”

Heading back to Ohio in the fall helped Shan make up his mind.

“I went back for my official visit in October and that sealed the deal for me,” he said.

Forward Trevor Kerns (Kansas Rush) committed to Eastern Illinois for the class of 2015.

Midfielder Ethan Lamb (FC Copa) committed to Ohio Wesleyan for the class of 2015.