Adam Haidi, a playmaking central midfielder whose vision helps him succeed on the field, picked NJIT because he felt like it would set him up for success off the field. 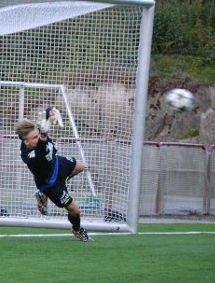 Torgeir Fjaer makes a save.

“I decided to commit to NJIT based on the benefits of my future,” he told TopDrawerSoccer.com. “Not only from a soccer aspect, NJIT is one of the top engineering schools in the country. A degree from a highly recognized institution like this will help me make connections and get a job.”

A technical player from New Jersey, the in-state program appealed to him because of the coaching staff and the style of play.

“Based on the way I've seen the team play, I feel as if I would fit well in the midfield with the team,” Haidi said. “The coaching staff also made me feel very wanted and comfortable which is important to the emotional part of the game. They're people I would want to stay connected with even after college is over.”

Staying close to home was another plus to his decision.

“The school is located in Newark, New Jersey,” Haidi said. “I like to tell my friends that it's like its own city inside of another city. I'm a fan of the city life and being that it's close to New York is a plus. It's also about an hour away from my home so my parents are happy that I'm still close to them.”

Three players are verbally committed to join NJIT in 2015.

For Togeir Fjaer, the next strep for him after Norway is enrolling at Georgia Southern, a school he liked for how its potential of helping him develop athletically and academically.

A goalkeeper from Mix Diskerud’s former club in Norway, the rise of soccer in America caught his attention and triggered his decision to pursue college soccer opportunities stateside.

“I have noticed that football in the United States is just getting bigger and bigger and alter being invited to train a couple of teams I got a good impression and I think it will be a good experience for me as a person,” he said.

Fjaer is the seventh player to commit to join Georgia Southern for 2015.

An athletic midfielder and self-described student of the game, Peyton Mowery is willing and able to play any spot on the field.

Also ready to work hard for his team, Mowery will take his work ethic to Cincinnati this fall after verbally committing to the American Athletic Conference Program.

“A large part of my commitment was based on the coaching staff and the academics,” Mowery told TopDrawerSoccer.com. “My plan is to major in mechanical engineering which UC has an exceptional program and is known world-wide. The coaching staff is experienced and I believe they can help me excel on and off the field.”

Along with academic ambitions off the field, a tight-knit team on the field also attracted him to the school.

“I liked that the team is close on and off the field,” he said. “The players work hard for each other and appear to put themselves second and the team first. The other piece is the coaching staff. I’m comfortable around Coach Dayes and feel that he can help me be all I can be as a player and as a young man.”

Three players are currently committed to Cincinnati for 2015.

Midfielder Martin Salas (FC Dallas) committed to North Carolina for the class of 2015.

Goalkeeper Kyler White (FC Delco) committed to Providence for the class of 2015.