Between his play with Missouri club St. Louis Scott Gallagher and time spent with the U.S. U17 MNT, A.J. Palazzolo had a lot of quality options to choose from in his recruiting search. 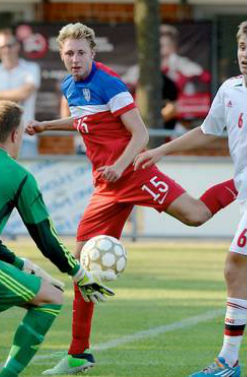 Eventually, he settled on a Big Ten powerhouse not too far from home.

“I like Indiana itself because of what it offers educationally,” Palazzolo told TopDrawerSoccer.com. “I feel strongly that my personal goals can be achieved at Indiana. My family can make a short four hour drive in order to visit me and also watch me play. I am confident the Indiana coaches can help me maximize my abilities so I can reach my full potential.”

While the academic opportunities and proximity to home playing a big role, the history of the Indiana soccer program played a big role as well.

“I like Indiana’s strong soccer tradition with eight National Championships,” Palazzolo said. “In the past the Indiana coaches have developed players giving them an opportunity to play at the next level, which matches my goals completely. Indiana appealed to me because of its professional environment. Their history of great results has a lot to do with their coaching staff. I really feel wanted by all of the coaches at Indiana and it’s nice that they have belief in me.”

A competitive defender who is both technical and not afraid to get physical in the tackle, Palazzolo is eager for the challenge of the Big Ten conference and the tough schedule IU generally plays.

The comfort and surroundings of the campus also caught his attention.

“To me Indiana is a large school, but has a small intimate community feel,” he said. “The academic side has a lot to offer so I can be well prepared for my future. The facilities are amazing and the student body really supports their sports teams including the soccer program.”

Palazzolo is the second verbal commitment to join Indiana in 2016.

A powerfully built and tactically savvy defender, Joe Langenderfer is taking his talents to the ACC this fall.

“I decided to commit to Boston College because it was the best fit for me,” he told TopDrawerSoccer.com. “The premier academics combined with the great soccer program and coaching staff attracted me to play there.”

Head coach Ed Kelly and the rest of the coaches at BC impressed the defender by taking a deeper look at the player off the field.

“The coaches were not only interested in me as a player but also in my individual character, which was an important factor,” Langenderfer said. “Also, the players on the team were very relatable and were focused on winning and playing as a team while I was on my visit, which was another central component.”

Of course, his interest in the school stemmed from its high academic reputation, while the soccer side also fit what he was looking for.

“The traditions and sports rivalries the school has within such a vibrant community is amazing and I am excited to be a part of it,” Langenderfer said. “Lastly, the school's location within the amazing city of Boston was an important component for me when deciding on schools.”

He is the third reported verbal commitment to join Boston College in 2015.

Midfielder Clayton McDonald (Vestavia Hill SC) committed to UAB for the class of 2015.

Defender Michael Jimenez (Chicago Fire) committed to UIC for the class of 2015.

Midfielder Ben Strozewski (Lonestar SC) committed to Washington (Mo.) for the class of 2015.

Defender Rory Slevin (PDA) committed to Virginia Tech for the class of 2015.

Defender Erik Swenson (PDA) committed to Penn for the class of 2015.

Defender Grant Elgin (PDA) committed to Manhattan for the class of 2015.

Midfielder Eryk Williamson (D.C. United) committed to Maryland for the class of 2015.