An unpredictable attacking player who caught the attention of major programs at the Boys High School All Americangame last December, Edward Opoku’s late commitment to Virginia was a big boost for the national champions. 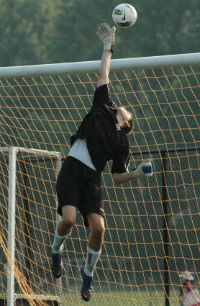 “It was a tough decision to make honestly because I liked pretty much all the schools I visited and I liked every single coaching stuff as well,” Opoku told TopDrawerSoccer.com. “It came down to three amazing schools but after my visit to UVA I felt really close with the assistant coach Terence Boss and coach George [Gelnovatch]. After spending dinner with coach George, Terry and other stuff members I felt welcomed there than I did with other schools.”

“The team was really united as a family and even on the field you could see it in how they defend, attack, everything was done as a group and not individual,” he said. “I think for me I need a team like that to help me have a better career in soccer. I look forward to meeting the team and can’t wait to join the family and play with some of the best players in the country.”

From the academic perspective, it wasn’t too tough of a choice for the Right to Dream product.

“UVA is one of the best schools in the country and it’s just a dream for every kid in the nation to be able to enroll at school like UVA,” Opoku said. “I can’t tell you how excited I am. I know its going to be challenging for me with the transition but I know with the support they have there, I will be able to strive under it and become a successful person one day. I can’t play soccer for the rest of my life and at some point in my life I have to work and having the opportunity to earn a degree at UVA will help my life after if I am good enough to make it to the top.”

The Cavaliers have a strong six-player crop lined up for 2015.

For Ryan Melink, a creative player who enjoys going up against players one-v-one, the opportunity to stay close to home was one of many reasons that drew his commitment to join an American Athletic program.

“I chose Cincinnati because I believe the school has the best facilities and programs for me to be successful on the field and in the classroom,” Melink told TopDrawerSoccer.com. "I also love the fact that I get to represent my hometown and play 30 minutes from home.”

“Both coach Dayes and coach McNally love winning and consider academics an important part of playing Division 1 soccer,” he said.

With the possibility of competing for the starting spot this fall for the Friars, 6-foot-7 goalkeeper Kyle Hartigan found a slew of reasons to commit to the Big East program.

“I decided to commit to Providence College because it’s a small, a confined campus, I liked the coaching staff and the players on the team,” he told TopDrawerSoccer.com. “Providence College is a place that will push me to be the best soccer player, student, a person I can possibly be."

With a number of Division I programs in the Northeast looking to secure his services, Hartigan liked the work rate he saw from the players on Providence and their style of play.

The school’s location and size appealed to him as well, while a positive trip to the campus helped convince him that the Rhode Island school was the right spot for him.

“Everyone I met while I was there was very friendly and welcoming and the classes sizes are what I was looking for,” he said.

Eight players are verbally committed to join Providence this year.