Maryland’s 2015 recruiting class continues to have the look of something special, with nine players verbally committed to join Sasho Cirovski's program next fall. 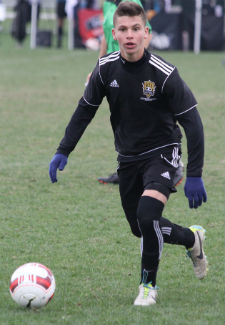 “I decided to commit to Maryland because I felt it was the perfect balance athletically and academically for me,” Franco told TopDrawerSoccer.com.

Franco, along with competing for Boca at the club level, is a standout attacking midfield on Scheck Hillel Community School’s high school team. The prep program has made it to the past two Class 1A final fours in Florida, but have yet to win, something Franco will look to help rectify this season.

Maryland’s high level appealed to him.

“I really like the professional environment that is present in the soccer program at Maryland compared to the other schools that were recruiting me,” Franco said.

Location was another factor, as the South Florida native was looking to live elsewhere to play college ball.

“I always wanted to leave home and play college soccer up north as well,” he said.

An attack-minded player who looks to setup teammates to score rather than take them himself, Barrett Stevens will make the relatively short trek from South Carolina to West Virginia to continue his college career at Marshall.

“I committed to Marshall because I connected well with the coaching staff and felt like a part of the Marshall soccer family immediately,” Stevens told TopDrawerSoccer.com. “It was just the right fit and it where I knew I wanted to attend college.”

Competing in the American Athletic Conference was a big part of the draw for Stevens.

“Marshall’s soccer program is in a very competitive conference and the staff and players were very friendly and welcoming,” he said. “I also really like their style of play.”

Finding a school with his ideal academic option was another big part of the process.

“I plan to major in Athletic Training and they have one of the top programs in the country for this,” Stevens said. “I also really liked Huntington and the college-town feel of it.”

He’s the first verbal commitment to Marshall for 2015.

Midfielder Nick Dibiase (TSF Academy) committed to Bloomsburg for the class of 2015.

Goalkeeper Aaron Schein (World Class FC) committed to Williams for the class of 2015.

Midfielder Ian Gammon (Indiana Fire Academy) committed to Evansville for the class of 2016.