A versatile player who has played every position on the field except in goal and at left back, John Hamilton is ready to play anywhere on the field to help his team win.

He took notice of Providence’s recent accomplishments on the field, which helped fuel his decision to pick the local program. 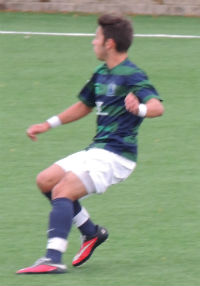 “I decided to commit to Providence because of the success they have had in past seasons, like making it to the final four last year,” Hamilton told TopDrawerSoccer.com. “Also, they have amazing academics, which is big because if soccer doesn't bring me as far as I want, I will have had a great education. Then, when I went to visit I got to meet the team and rest of the coaching staff, and it just felt right, when I met the team I felt welcome and they were all very tight, which is something I wanted to be apart of as soon as I saw them.”

While parsing through other schools in the Northeastern corner of the United States, Providence’s style of play helped stand out to him.

“Since I've been with the Bolts I've played in a very similar system because Brian Ainscough was my coach,” Hamilton said, “him and Craig are good friends and very similar in their coaching styles, they really like to work it through the midfield and use the center mids, which is my main position, to distribute the ball forward as much as possible.”

“The campus was gorgeous, and the amount of kids who attend is about the same as where I go to school now, like 3,000-4,000, so it shouldn't be a hard transition,” Hamilton said. “Also I've always wanted to be in the city, and Providence is a very good spot to be, there is tons to do. Finally the academics like I said before are incredible, I can learn so much and get a lot out of it.”

Five players are committed to Providence for the class of 2015.

A variety of factors helped separate Memphis from the rest of the pack of schools he was looking at in the recruiting process.

“I chose to commit to Memphis because it has a great up and coming program with a great team,” Gouveia told TopDrawerSoccer.com. “I like everything about the soccer program at Memphis. They have a great coaching staff and excellent team and facilities.”

Gouveia, who features up front in the Development Academy for St. Louis Scott Gallagher, has bagged four goals in 15 games this season.

The American Athletic Conference’s location played a role in his final choice.

He’s the first verbal commitment to Memphis for 2016.

Forward Anthony Gomez (TSF Academy) committed to Iona College for the class of 2015.

Forward Zander Perelman (Heights United) committed to Bucknell for the class of 2015.