Since she started playing soccer in Southern California, Lauren Brzykcy’s dream has been to play for UCLA.

In 2017, she’ll join the Bruin soccer program after recently committing to join the Pac-12 power. 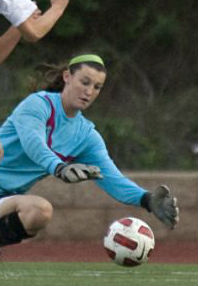 “I liked the program’s success, the high level of play, the coaching staff and the camaraderie within the team,” Brzykcy told TopDrawerSoccer.com.

A consistent standout for a So Cal Blues U15 ECNL side that has conceded just one goal in the current season, Brzykcy had a number of high caliber programs interested in securing her services.

But with help from her club coaches Ali Malaekeh and Dido Tshimanga, she settled on Westwood, as it also offered her specific academic opportunities along with the outstanding soccer program.

“It has such a great history, beautiful campus, and it’s close to home,” she said. “It’s one of the only big colleges that has a sign language program. I hope to work helping deaf children when I graduate.”

Brzykcy is the third verbal commitment to UCLA for the class of 2017.

Tracking down and securing the top talent in Texas has always been one of the harbingers of Texas A&M’s success.

And the program recently snapped up a forward for its class of 2017 with the commitment of Sophie Salverino.

“I decided to attend Texas A&M because it has been a goal of mine since I started playing soccer to play for the Aggies,” she told TopDrawerSoccer.com. “After visiting the campus and talking to coach G about the type of offense that they play and how my style of play would fit in, I felt it suited my strengths very well, not to mention the opportunity to play for a team with the overall success the women's program has had over the last 20 years and especially this year making it to the College Cup.”

Salverino was taking a close look at other Texas programs that were in the Big 12. But with the chance to stay close to home (A&M is a little over an hour away from where she lives now) and the caliber of the soccer program ultimately convinced her to commit to College Station.

“I liked the fact that the soccer program is a very close knit group of girls and I felt really comfortable around both the coaches and players right away,” Salverino said. “Also, at Texas A&M academics are the No. 1 priority for student athletes and the women's soccer team is always leading the way.  I feel that Texas A & M will give me the opportunity to achieve all of my goals both as a player and person and prepare me for life after soccer.”

Four players are committed to Texas A&M for the class of 2017.

A versatile and tactical player who looks to make her creativity thrive in the midfield, a familiarity with a certain coach led Hannah Torbett to make a college commitment.

“I decided to commit to UTC mainly because of the coaches,” she told TopDrawerSoccer.com. “They just hired two new coaches who have a great vision for the program. Gavin McKinney has coached me at the ODP level and I really enjoyed playing for him. He has a great soccer mind and was very successful in his previous coaching position. Danny McBride, the assistant coach, is an all around awesome person who not only understands the game but can also joke around and have fun. The two of them together make a very smart coaching duo.  I am very excited about playing for them.”

After making several unofficial visits in her recruiting search and still looking for the right place, it didn’t take long to see that UT Chattanooga was the right place.

“When I visited UTC I knew almost immediately that I wanted to be a part of the program,” Torbett said. “They are making big changes and I am very excited to be involved in a program that is growing and heading in the right direction. UT Chattanooga really impressed me with all they have to offer. It is a great school in a gorgeous setting.”

Two players are verbally committed to join UT Chattanooga for the class of 2016.