There was plenty that drew Amanda Hoglund to make her commitment to Baylor. Head coach Marci Jobson’s influence was obviously very important, but when the Sockers FC forward first laid eyes on the school in person, it was a deciding factor. 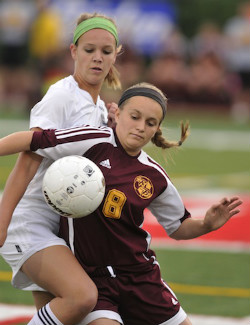 “I visited Baylor twice and automatically fell in love with my first visit,” she told TopDrawerSoccer.com. “The campus is beyond gorgeous. The academics and soccer are both very strong at Baylor and I want to make an impact to a team that is the style I play and I feel like Baylor was the right choice. Baylor was the total package and Marci, Paul [Jobson] and Chuck [Codd] made it feel like home to me.”

Hoglun also noted the program’s performances on the field, and its success surely helped swayed her in the decision-making process.

“Baylor is ranked No. 10 in the nation for women's soccer and is very competitive,” she said. “The amount of pressure Baylor puts on teams is huge and they are a possessive team, which I love. Coach Marci, Paul, and chuck helped make my decision even easier. I knew I could get coached by such smart people and I would be able to not only play but learn the game more. The soccer program at Baylor is strong and competitive and that's something I was looking for in a school.”

Waco, Texas isn’t exactly close to Hoglund’s hometown in the Chicago suburbs, but that wasn’t an issue for her in the end.

“The school made me feel comfortable where I was even as far as I am from my family in Illinois,” she said. “I felt at home right when I stepped on campus from the buildings to the people I knew I was in a good place to call my home for four years.”

Chalk another commitment up to the recruiting prowess of a coaching staff, as Nikki Izzo-Brown and her assistants lured Patricia Fernandez all the way from Texas.

“I felt like they would take care of me and help me accomplish all of my goals,” Fernandez told TopDrawerSoccer.com. “On my visit I spoke to some of the players and many of them said that they came to West Virginia because of the family atmosphere, not only on the soccer team but as a school as a whole. I think that’s what really set them apart from most of the other schools.”

While perhaps not acknowledged as such, the Mountaineers have developed into a quality program, and enjoyed an undefeated Big 12 season in 2012. The program’s stature was another draw for the technical midfielder.

“The soccer program is already pretty established, and I wanted to come and contribute to an already great team because being around great players will help me become better,” she said. “The facilities are great. It may sound weird, but I really liked the fact that their practice and game fields are grass. When I went on my visit I just knew that I wanted to go there.”

There was plenty that Fernandez liked about the school off the field.

“I loved everything about the school,” she explained. “West Virginia is beautiful, and I liked the size of the school. Although, West Virginia is pretty big, you can make it as big or as small as you want. Everyone there was extremely friendly. They’re just one big family.”

But the school itself did its part as well.

“I fell in love from the second I stepped on campus, it felt like the right fit for me,” Frick told TopDrawerSoccer.com. “The coaches were awesome and I think it will be a great school to get an education and play soccer.”

Playing Division I soccer was always one of Frick’s goals, and she felt like Chastain knew what kind of player she was already.

Frick also liked the opportunities the school offered in the classroom.

“The campus is beautiful and they are highly ranked in academics,” she said. “I loved the urban feel and I think having the [L-train] go through the campus is really cool.”

Forward Bryson Thomas (Dallas Sting) committed to North Texas for the class of 2014.

Midfielder Kristin Kelley (D’Feeters) committed to Texas A&M-Corpus Christi for the class of 2015.