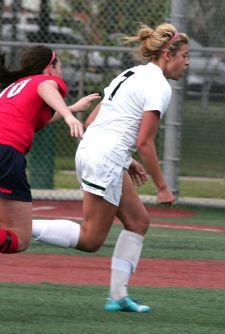 Wilkins served as Kleedtke’s ODP coach a few years ago, and the two stayed in touch since then, with the Michigan defender admiring and respecting Wilkins’ coaching style.

Eventually, that relationship helped Kleedtke decide to commit to join the Badgers in 2017.

“She challenges her players to commit 110% of themselves to every aspect of the program,” she said of Wilkins. “I really love how she motivates her team to stay positive even in the most difficult games. She has a way of connecting with them both on and off the field.”

Every college recruit looks at what a school offers away from soccer, and Kleedtke found much to like about Wisconsin in that regard.

“Outside of soccer, I was drawn to the program by the university’s spirit,” she said. “Wisconsin students are extremely prideful and on game day the whole campus is wearing red. It is a really cool experience to walk through campus and see everyone wearing as much Wisconsin apparel as they can find. Aside from school spirit, Wisconsin also offers amazing academics on a beautiful, lake front campus in the city of Madison.”

The program’s success in 2014 – they won 19 games, the most in program history – was another draw, as she hopes to join a team that accomplishes things on the field.

“I really want to be part of a future winning team,” Kleedtke said. “I look forward to improving my game to be the best defender I can be. I am excited to work hard and challenge myself as a Badger. I couldn't imagine playing anywhere else.”

Kleedtke is the first verbal commitment to Wisconsin for the class of 2017.

A creative attacking midfielder who has honed her game with both the Minnesota Thunder Academy and Atlanta Fire, Keely Cartrett found the right blend of great athletics and a great education at Alabama.

That first caught her attention about the school she’ll join in the fall of 2016, and when she met the team, it sealed the deal.

“I loved them,” Cartrett told TopDrawerSoccer.com about the current team. “They were the perfect blend of funny, smart, and loved soccer. After going to dinner following my unofficial visit, I told my dad this is the place for me because I wanted them as my teammates.”

Alabama was always a favorite from the start of Cartrett’s recruiting process.

“When I was in the eighth grade, my club coach mentioned to me that some schools had reached out,” she said. “That night I sat with my family and we decided we should start the recruiting process by reaching out to the schools I would be interested in playing soccer with. It turned out to be a very short list. I told them I wanted to go to Alabama.”

Cartrett is hopeful that the team isn’t far from contending for SEC championships under head coach Todd Bramble. She also felt like the school offers the right educational opportunities away from soccer.

“Alabama has been making serious investments in the overall quality of academic programs and now boasts more National Merit Scholars than any other public institution,” she said. “But it is the blend of academics and sports that was my draw. I love sports, all sports, and someday hope to be a sports reporter. What better place to study than the center of college sports activity – Alabama in the SEC.”

The midfielder is the fourth verbal commitment to Alabama’s 2016 recruiting class.

Midfielder Ashley Smith (Dallas Texans) committed to Central Arkansas for the class of 2015.

Midfielder Addison McCain (FC Dallas) committed to Texas A&M for the class of 2017.

Midfielder Madissen Lewis (Dallas Texans) committed to Oklahoma for the class of 2016.

Midfielder Alexa Ferreira (PDA) committed to Rutgers for the class of 2017.

Midfielder Erin Trapp (PDA) committed to Columbia for the class of 2015.