A technical, attacking central midfielder and member of the U.S. U17 WNT player pool, Rachael Dorwart was convinced pretty early that Chapel Hill was the right destination for her college career. 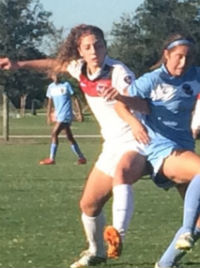 “North Carolina was one of the first schools I visited, and I immediately loved it,” she told TopDrawerSoccer.com. “Over the last few months I've developed a good relationship with coach [Anson] Dorrance. They're a possession-oriented team, and their attacking style of play really suits my game.”

As one might expect, the program’s history of success appealed to the Pennsylvania standout.

“When you talk winning tradition, nobody beats North Carolina,” Dorwart said. “They have a great history of developing players at the national level. Coach Dorrance and the coaching staff also do a great job at creating a competitive atmosphere at every practice for their players which is why their always one of the top teams every season.”

Along with the program’s reputation on the soccer field, the challenge in the classroom was another reason Dorwart made her decision.

“It's a great school academically, and they have high academic standards for their student athletes,” she said. “It's a small campus in a beautiful college town setting. Being from the Northeast, playing in a warm weather climate is a bonus too.”

Dorwart is one of two players committed to North Carolina for 2018.

Last week’s national signing day was the chance for players to officially ink their future to college programs this fall.

Forward/midfielder Amanda Hill is heading north, as she signed on the dotted line to join Towson in Maryland.

“I decided to commit to Towson above other Division I programs due to the fact I found it to be the perfect fit not only for soccer but, for college as well,” Hill told TopDrawerSoccer.com. “Towson offers me an amazing education, as well as being in a medium to large campus setting. The Towson coaches were personable and very professional and I felt they gave my offer a personal touch when the head coach came to visit me for a home visit with my family in Tampa.”

Hill, who was open to leaving Florida for college, accumulated a number of offers from a variety of different programs. But she took her time, eventually making her verbal commitment the fall of her senior year after finding exactly what she wanted in a soccer program.

“The CAA conference allows me to play against amazing competition while also challenging myself to be the best,” she said. “The coaches were a huge part of my decision as well. Head coach [Greg] Paynter and assistant coach [Mike] Eckberg seemed like the perfect duo to assist me in my collegiate career.

The size and location of Towson was also ideal.

“It has approximately 19,000 students, yet doesn’t have an overwhelming feel, it’s just right,” Hill explained. “I also loved the fact that almost all classes are taught by professors and not [teacher’s assistants] and class sizes are small. The location is perfect for me due to the fact I have always wanted to play up north. Towson has been listed in the book ‘Colleges that Change Lives’ and I believe it was a perfect fit for both soccer and college for me.”

A tie with head coach Greg Ryan opened the door for Lauren Long’s commitment to Michigan.

Ryan, who coached Long at the ODP level, allowed the Eclipse midfielder a chance to get familiar with his coaching style.

Eventually, it led for her to verbally commit to the program for 2017.

“I have always been interested in the University of Michigan,” Long told TopDrawerSoccer.com. “Michigan has a solid reputation academically, strong athletic teams and a beautiful campus.”

Long did her research of course, as her decision was more than just liking the coaching staff.

"When I took my campus visit, I knew Michigan is where I belong,” she said. “The team is a family and I immediately felt comfortable with the players and coaches.”

She’s the first verbal commitment to Michigan for the class of 2017.