Girls Commitments: Eager to be an Eagle Recently called into the latest U.S. U16 GNT camp, Madison Murphy has also figured out her college future. 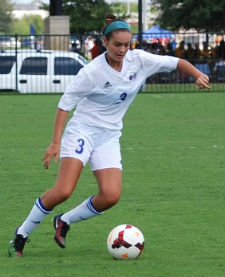 The Top 30 ranked netminder will head to the ACC in the fall of 2018 after verbally committing to Boston College.

“I knew when I stepped on campus that it was a great fit for me,” Murphy told TopDrawerSoccer.com. “I wanted to be at a school with a campus, close to home and I want to play in the ACC.”

A hard-working shot-stopper who is confident with the ball at her feet, Murphy found a demanding soccer program, something that was a big part of her college search.

“I like the intensity of the trainings,” she said. “I really like the fact that if I prove myself worthy that I can play. That was a very important factor in my decision. I wanted to commit to a program with this philosophy. I want to make an impact on the team that I am a part of.”

The picturesque campus close to the city of Boston and a chance to play close to where she lives now were also factors.

“I liked the size of the school and the campus,” Murphy said. “The students and the student athletes all looked very happy at BC. I especially like that BC is very close to home so that all of my family and friends can watch me play.”

Murphy is the first player to commit to join BC in 2018.

A standout defender on Dallas-area club power Solar, Izabella Ward is an aggressive player who likes to get involved in the offensive side of the game.

She found many reasons to make Louisiana Tech her future college home.

“LA Tech has a long tradition of being a great school for a student athlete,” Ward told TopDrawerSoccer.com. “For being a midsize school, it has big time school programs, all while having a small town feel. Being a rural school, it has a great campus. The more schools I visited, the more I knew LA Tech was the place for me. LA Tech has strong athletic programs, and a strong foundation for its soccer program.”

Looking at a number of schools in the south and southeastern corner of the United States, a strong performance from the program in 2014 opened her eyes to joining the Conference USA program.

“Spending time with coach [Kevin] Sherry and sharing the pillars in which he’s building his program, I knew I wanted to be a part of that program,” Ward said. “I feel my competitive skill set will help this team to a conference championship. The closeness of the team, and community outreach that they do, show the character they have. I can’t wait to get there and join this great group of players.”

Ward is the second verbal commitment to join LA Tech in 2016.

With the desire to move somewhere warm, and Florida in particular at the top of her list, Brandi Walker found North Florida to check all of the boxes of her search.

“On my first visit to UNF I loved the campus, the size of the school and enjoyed their style of play on the soccer field,” Walker told TopDrawerSoccer.com. “When I met coach [Robin] Confer and some of the players I knew this is where I wanted to go to college and play soccer. The players were really nice and it felt like a family atmosphere where they cared about all aspects of you, your success on and off the field.”

Walker was also interested in joining a budding program that is also a good fit for her because of the team’s style of play.

“I have great respect for Coach Confer with the experience she brings as a player and a coach,” she said. “I am so excited to become an Osprey and represent the University of North Florida.”

The Carolina native is the second player to commit to North Florida in 2016.