For Juliana Comer, an early trip to upstate New York to see Cornell set the tone for her recruiting search. 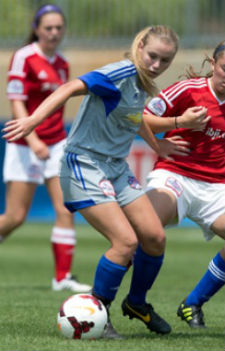 “Cornell was one of the first schools I visited, and I loved it right away," Comer told TopDrawerSoccer. "Every school I went to after that I compared to Cornell, and Cornell always remained the one for me. From the coaches, to the players, to the outstanding academics, to the size of the school, its beautiful location - everything just felt right."

A technical, ball control player who looks to find space, see the field and distribute the ball, finding an appropriate playing style was also important, something she thinks Cornell offered her.

“I really like the coaches and their coaching style,” Comer said. “I'm very used to playing possession, quick passing soccer so I think I'm a good fit for them. I really want to play with their team and I want to make an impact. I also liked how coach Farmer encouraged me to look around a lot before I agreed to commit so that I'd be sure that Cornell was the school for me.”

Of course, the icing on the cake was the chance for Comer to continue her soccer career while also pursuing an Ivy League degree.

“I like Cornell because it has the perfect balance of soccer and academics,” she said. “The education Cornell can offer is an amazing opportunity for me. I'm leaning toward a major in engineering, and Cornell has one of the best engineering schools in the country so, for me, Cornell offers the best of both worlds.”

Comer is the second reported verbal commitment to join the Big Red in 2016.

A competitive forward for Omaha Elite – a school that has sent its share of talent to big Division I programs recently – Kailey Lane’s targeted academic path played a major role in her college decision.

“The University of Kansas is a perfect fit for me both academically and athletically,” Lane told TopDrawerSoccer.com. “My club coach Marcus Kelcher was very instrumental in assisting me throughout my college search. My intended major is Education and working with special needs children. KU has one of the best if not the best public Special Education Departments in the US.”

The Nebraska native was also looking for a college home that would keep her close to her family.

“The location is not too far from home where my family and friends can visit and also see a good portion of my games,” she said. “KU is a top notch school and I want to be a part of it, both on and off the field.”

Of course, the KU program has made significant strides recently, posting a 15-6 record in 2014. Lane cited the coaching staff as also playing a pivotal role in her commitment.

“Coach [Mark] Francis and his staff are incredible,” she said. “From start to finish during this whole process they were very supportive and I could tell that they truly wanted me to be a part of their program at KU. During my unofficial visits I was very impressed with the current team. They are a close group that has a wide range of personalities, which I like. I have a good feeling that we will be able to hold each other accountable and help build on the success of the program.”

She’s the first verbal commitment to Kansas for the class of 2017.

Defender Izabella Ward (Solar Chelsea) committed to Louisiana Tech for the class of 2016.

Forward Gabriella Bair (PDA) committed to Bucknell for the class of 2016.

Midfielder Taylor Callahan (Richmond United) committed to VMI for the class of 2015.

Goalkeeper Olivia Camera (FC Virginia) committed to San Francisco for the class of 2016.