Girls Commitments: Southeast it is With an academic path in mind, center back Jacqueline Schaefer embarked on her college search looking for the right soccer program and school.

It eventually led her to stay in the southeast, as the Florida native will join SEC program South Carolina in 2017. 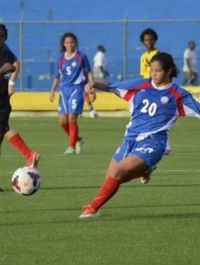 “The first time I stepped on the campus I loved the city type feel,” she told TopDrawerSoccer.com. “The facilities are fantastic and they keep on improving with a brand new business school and new dorms and the soccer building currently under construction. I also liked the many different academic opportunities including the No. 1 Public Honors College and International Business School in the country.”

Looking at programs in the SEC and ACC, the program’s ambition appealed to the possession-oriented defender.

“They are consistently competitive in the SEC as well as continuing to advance further each year in the NCAA with goals to reach the Final Four,” Schaefer said. “All three coaches are great and the husband wife team of Jamie and Shelly Smith provide a fantastic family atmosphere. The fact that they have been at the school so long and just signed an extension is comforting. Every time I was at the school, the players I met on the team were fantastic and everyone of them always talked about what a great decision it was to come to South Carolina.”

Finding a school that provides support to its student athletes was another huge factor in her choice, not to mention the demands of playing in the consistently improving SEC.

“The new soccer facility will be amazing with brand new locker rooms, player lounge, weight, film and training rooms,” Schaefer said. “Playing in the SEC is a fantastic opportunity because the school's athletic department is so well supported and I have family all around the country so they will be able to watch a lot of games online with the SEC Network.”

A simple meeting with Valparaiso head coach John Marovich went a long way to convince Eva Schneider that this was the right program for her.

“When I met with coach Marovich, he showed a lot of enthusiasm, energy and sincerity toward me, which in turn made me excited,” she told TopDrawerSoccer.com. “Additionally, he showed me a video of typical day and life of a Valparaiso women’s soccer player and seemed to be a perfect fit for me.”

A competitive and defensive player willing to do whatever it takes to keep a shutout, Schneider’s Rocky River High School won the 2014 girls state soccer title in Ohio, the first in 86 years.

She liked the demands of the Horizon League, Valpo’s conference. She also was intrigued by the school’s size, which was on the smaller side, similar to her high school.

“I visited the campus, which is beautiful and I fell in love with Valpo,” she said. “Valpo is perfect size college for me and is only 40 miles southeast of Chicago.”

After competing with the U17 Puerto Rican national team in 2013, the exposure of a higher level of soccer triggered Alyssa Rodriguez’s interest in playing Division I soccer.

Eventually, she found her way to Southwestern Virginia and a Big South program.

“I looked at the coaching staff and loved what Radford University had to offer me,” she told TopDrawerSoccer.com. “Coach Ben [Sohrabi] from [Radford] was great.”

While Rodriguez looked at a number of schools in state, living in northern weather was something she was eager to experience. That, combined with what Radford offered on and off the field helped her decide to sign.

“I read many good things about Radford University, and so I decided to see it with my dad,” she said. “[I] loved the team and loved how the coach is focused on winning and training, and loved the facilities. I hope what I bring to RU is and will make my new team happy and victorious.”