Girls Commitments: The pull of possession Score another top player for the California 2017 recruiting class. 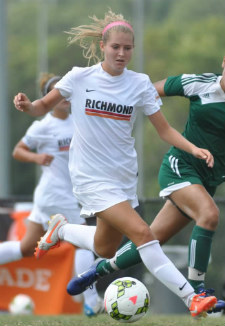 Kailee Gifford, a technical outside back for the De Anza Force U16 squad, is the latest to verbal to join the Golden Bears in a few years.

“It is the best fit for me and my family,” Gifford told TopDrawerSoccer.com. “I absolutely love both the soccer program and the school, and the location is perfect. I’m also really happy that my family will be able to come to my games.”

Gifford’s familiarity and desire to play a particular brand of soccer was important to her college decision, as she’ll enter the DI level after playing on a De Anza Force side that emphasizes that approach.

“I fit into a possession style team the best, and Cal is exactly that,” she said. “As good as the program is now, I believe that it will only get better with time, and by the time my class gets there it will be something really special. Also, the coaches are really great, and give a lot of support to the players.”

The school’s strong blend of both academics and athletics also factored into her commitment.

“I love that while it is a highly selective academic school, it has a very strong athletic reputation,” she said. “Also, the campus is beautiful, the students are amazing, and the location is perfect.”

Seven players are committed to California for 2017.

Olivia Mills is a self-described student of the game, always searching for ways to improve herself on the field.

A midfielder for Richmond United’s U18 ECNL squad is excited about the challenge of playing in the Big Ten after verbally committing to join Maryland next fall.

“I committed to Maryland because it felt like home and for me that is a big deal,” she told TopDrawerSoccer.com. “I love the coaches, their passion and determination is exactly what I am looking for. The facilities, fields and locker rooms are exactly where I see myself for the next four years.”

Like Gifford, Mills liked the way the team approach the game on the field and is eager to be a part of a team that plays possession soccer.

“I love Maryland’s possession style of play and love that they build from the back,” Mills said. “I am up for the challenge and looking forward to going after the Big Ten Title each year. I wanted a coaching staff that cares about their players and wants to continue to develop them as players. You spend a lot of time with each other, feeling or having that “family” atmosphere, with strong team building was extremely important.”

Away from soccer, Mills found the right academic opportunities even though she’s not certain on her path of study.

“I am still deciding on my major, but Education or Psychology is at the top of my list,” she said. “I would love to Coach and Teach after my soccer career. The dorms for the athletes are exactly what I wanted, and they have a kitchen, so for me that is a plus. The campus although large, it is very easy to get around, and is a beautiful campus.”

Mills is the fifth verbal commitment to Maryland for 2015.

Goalkeeper Jennifer Hiddink (Air Force) committed to Air Force for the class of 2015.

Forward Audrey Ward (Dallas Texans) committed to Mississippi State for the class of 2017.