For Caitlin McPherson, a goalkeeper who embraces the demands of being a vocal leader at the back, staying in the state of Colorado was a big part of her decision to commit to join the Buffaloes in 2017. 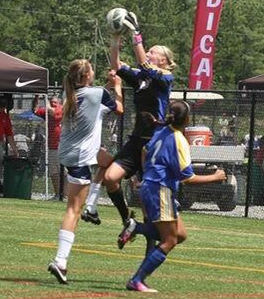 “The coaches seemed to be a perfect fit, the campus is beautiful, I love Colorado and couldn't imagine myself living outside of it,” McPherson told TopDrawerSoccer.com.

She also described a soccer program that is headed in the right direction, and is eager to play for a coaching staff that is always trying to help players reach another level.

“The coaches never settle and are always pushing the players to be better, the competitive training environment, every player pushes every player, and the success they are having [appealed to me],” she said.

McPherson also found the right kind of student-athlete support at Colorado, not to mention a picturesque environment. She’s the second player to commit to Colorado for is 2017 class.

As a player who labels herself as both fast and quick, and someone who aims to try and make the right runs at the right times, Samantha Sullenger will embark on a college career competing at Army in the Patriot League next fall.

It was the second time to West Point that sealed the deal for her decision.

“After arriving home from my second unofficial visit, I knew West Point was the school I was meant to attend,” Sullenger told TopDrawerSoccer.com. “I was at peace in the environment and knew I fit in. It was going to be my new home.”

Her new home also happened to have a soccer team that checked the right boxes for her.

“The soccer program I had envisioned for myself was one that I would be able to come in, connect with, make an impact and continue to grow into the amazing player that I'm striving to be,” she said. “Under the leadership of coach Marcia, coach Quinnie and I believe that I will be able fulfill my goals.”

Of course, there was a long list of positives she found about the school away from the soccer team.

“West Point is filled with so many amazing people who surround you and care about you. From the faculty, coaches, cadets, and even volunteers, everywhere you go there are people who are willingly giving their support and advice to help you conquer the challenges you face. The atmosphere is incredible, vibrant, engaging, and in addition to that, the campus and grounds are beautiful.”

Midfileder Isabel Rodriguez (Michigan Hawks) committed to Ohio State for the class of 2017.

Defender Sierra Grodsinsky (Vardar) committed to Oakland for the class of 2016.

Forward Taylor Troutman (FC Bucks) committed to Auburn for the class of 2015.