A dynamic and creative playmaker on Richmond United’s U15 ECNL squad, Paige Franks didn’t need long to settle on her college choice, recently making an early commitment to Tennessee.

“Coach [Brian] Pensky was the deciding factor and I want to be a key player to help SEC become a force in soccer,” Franks told TopDrawerSoccer.com. 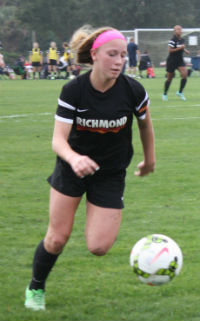 Pensky and Tennessee recently added Richmond midfielder Katie Cousins, the No. 1 recruit in the class of 2015, starting this spring. The program has amassed impressive recruiting crops in the past two seasons, and has a promising 2016 recruiting crop committed.

While Franks has a bit of time to wait before jumping to college, she knew that this was the right place for her.

“After spending time on the campus and with coach Pensky I couldn't imagine playing anywhere else, I didn't think it was fair to wait and talk with other coaches if my heart was truly with Tennessee,” she said.

With 18 goals and 12 assists in 15 games this season for Richmond, Franks has shown the ability to both score and setup her teammates.

She has faith in the coaching staff building something special in Tennessee, not to mention the chance to play with Cousins at some point.

“Coach Pensky has a vision for the women's soccer program and I wanted to be a part of his vision,” Franks said. “He is building a top soccer team that will make its mark in the SEC. I also look forward to playing on the same team as Katie Cousins.”

On the end of a number of Pagie Franks’ assist this season has been current club – and future college – teammate McKinley Burkett.

Also on the Richmond U15 ECNL squad, Burkett has amassed 22 goals in her 15 club appearances, and like Franks, will head to the SEC program, albeit a year earlier.

“Tennessee felt like a family from the minute I stepped on to campus, from the coaches, to the players I met, to the staff in the academic and athletic offices,” she told TopDrawerSoccer.com. “Also, the commitment that Tennessee shows to their female athletes is impressive.”

Pensky’s presence was a strong factor in her decision.

“Coach Brian has an extraordinary vision for the soccer program and a commitment to excellence,” Burkett explained. “Their facilities are also top-notch. Tennessee also has two strong recruiting classes committed for 2015 and 2016.”

There were plenty of off-field factors that also convinced Burkett.

“Tennessee offers the academic programming that I am looking for,” she said. “I like the feel of the campus being a college town.

Burkett is the first verbal commitment to Tennessee for 2017.