With her sister already attending the University of Michigan, it quickly became the top destination for Sean Sinko, a goalkeeper from Northern New Jersey. 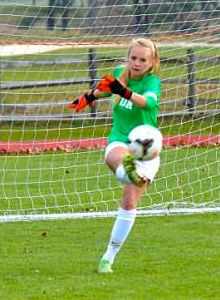 Visiting her sister gave Sinko the chance to see what it was like to be amongst the study body in Ann Arbor.

“Sporting events are so much fun, the school itself is academically prestigious, and you can barely go anywhere in a University of Michigan shirt without someone yelling ‘Go Blue’ at you,” she told TopDrawerSoccer.com. “In my college search I met many coaches, many teams, and saw many campuses, but no campus or team made me feel more at home than this one.”

While she was also considering schools a bit closer to home, the phenomenal athletic department at Michigan helped persuade her otherwise, not to mention the soccer team under head coach Greg Ryan.

“Sports teams at Michigan in general are treated really well,” she said. “They have awesome facilities and have advisors and coaches that are really willing to work with you and help you out. What I really love about the soccer program itself are the coaching staff, the players, and the way they play. They're a possession-oriented team, they work really hard, have really experienced coaches, and play in one of the most competitive leagues in the country.”

Sinko is the second verbal commitment to Michigan for 2016.

A technical forward who isn’t afraid to mix it up physically against the opposition defense, Courtney Walker will take her talents to Ohio State in 2017 after making her commitment to the Buckeyes.

“From the first time I visited campus and met the coaching staff it felt like home and I knew it was where I wanted to play soccer and continue my education,” Walker told TopDrawerSoccer.com.

Other Big Ten schools were on the list, but Walker felt like the OSU environment was the right one to help her improve as a player.

“I like how the coaches push you hard, hold you accountable and are there to support you on and off the soccer field,” she said. “When watching them play I liked the high work rate of the players also.”

The Columbus, Ohio school also ticked a number of other boxes off the field.

“When I started my college search I quickly knew I wanted to attend a large college and somewhere with colder weather,” Walker said. “The wide range of majors that the Ohio State University offers was very appealing to me also since I am undecided in what field I want to major in.”

Four players are committed to Ohio State for 2017.

Midfielder Blakeney Latson (D’Feeters) committed to Louisiana Tech for the class of 2016.

Midfielder Brooke Redington (So Cal Blues) committed to Stanford for the class of 2017.