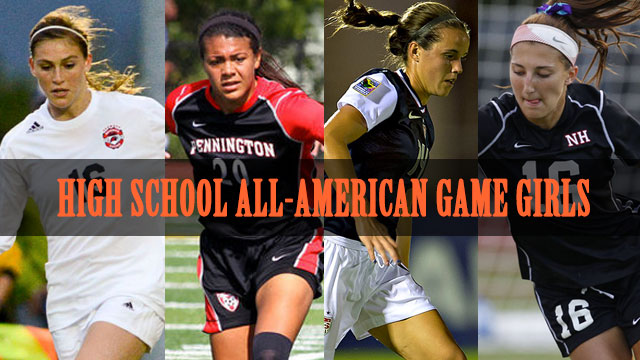 The second annual Girls High School All-American Game is taking on an Ohio-Indiana-Washington vs. New Jersey feel this year, as the rosters for the event were released Friday morning.

Ohio, Indiana and Washington account for 14 of the 20 players on the West squad, while nine players from New Jersey highlight the East roster. An additional Ohio player was named to the East squad since she plays for a coach who will be guiding the East team this year.

This is the second year for the East vs. West contest, which pits top seniors from fall-playing high school soccer states. The All-American games, boys and girls, will be played Dec. 13, in Raleigh, N.C., the same weekend as the NCAA Men’s College Cup. The East won last year's inaugural event in Cary, N.C.

Overall, all 20 players on the West squad have committed to NCAA Division I programs, while 19 of 20 have done the same for the East team -- although two for basketball.

The East squad is highlighted by Taylor Racioppi, the Class of 2015 No. 2 recruit in the Girls IMG Academy 150. Racioppi, who is committed to Duke, returned to high schol play as a senior and is nearing a 20-goal season as her team recently passed the halfway point of the season.

Other IMG Academy 150 players named to the game are No. 48 Jessica Udovich of Puyallup (Puyallup, Wash.), No. 58 Hailey Skolmoski of Riverton (Riverton, Utah), No. 65 Hana Kerner of Northern Highlands (Allendale, N.J.), No. 67 Cassidy Blacha of Avon (Avon, Ind.), No. 111 Jennifer Haskel of Ridge (Basking Ridge, N.J.) and No. 125 Annika Schmidt of Zionsville (Zionsville, Ind.). Haskel is injured and will not play in the match.

For more information about the game, visit highschoolsoccerallamerican.com