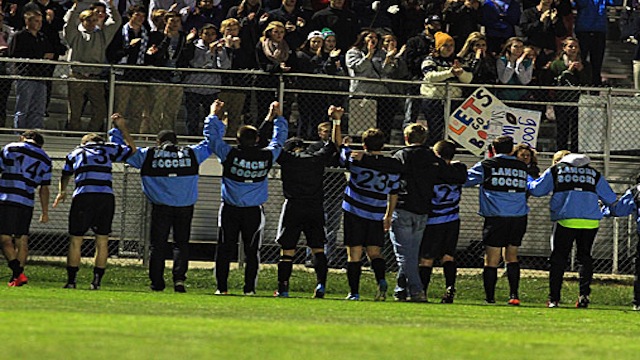 The TopDrawerSoccer.com fall soccer preview steams full speed ahead with seven more highly competitive states and a few of the dynasties that rule them. That includes a Pennsylvania girls program shooting for state history, a Rhode Island boys soccer institution and a southern girls power shift in Oregon.

North Carolina (boys only)
Wesleyan Christian (High Point) (25-0-0): Only an elite few teams each year can boast a completely perfect slate across an entire season, and Wesleyan can count itself in that club. The Piedmont Triad club won its second consecutive 3A North Carolina Independent Schools Athletic Association crown in 2012, though it was a senior-laden group. With seven starters gone, the onus falls to players like Drew Mostoller and keeper Connor Bell to hold the line and continue the school's heady tradition of winning another year. The good news is that the programs junior ranks is wildly successful and continually stocked with top prospects.

North Dakota (boys only)
Century (Bismarck) (15-2-1): The Patriots are quickly becoming North Dakota's newest dynasty. Fargo South established the best boys run in state history when it won four straight from 1998-2001. Century, meanwhile, has played in five of the last six finals and won its second straight over Fargo Shanley last season. That makes for three titles in the last six years. A good amount of experience talent departs, namely Alec Rauhauser, who played in each of the last four title games. Century's budding dynasty depends on finding replacements.

Ohio
Boys
Olentangy Liberty (22-1-0): In 2011, Liberty lost in the Division I state title game within Ohio's massively talented pool of boys soccer talent. It returned in 2012 and scored a 2-0 win over Southview to take its first state title in program history. After the most prosperous two-year run in program history (including setting the program record for wins in a season in 2012), the Patriots have a fat target on their backs this season. The Columbus-area school can cement itself as a Central Ohio dynasty if it can make more magic in 2013 despite shuffling on several starters.

Girls
Walsh Jesuit (Cuyahoga Falls) (21-0-2): The Walsh Jesuit dynasty proved it was alive and well in 2012. Jesuit finished No. 14 in the final NSCAA national rankings and was one of 10 in the top 25 to not lose a game. The school responsible for Michael Nanchoff has been a juggernaut on the girls side for nearly all of coach Dino McIntyre's 21 years, including a sixth Division II state title after a 21-win season last year. The senior defensive pairing of Emily Rogers and Kaitlyn Semelsberger linked up with midfielder Maddy Anzelc puts Jesuit in the discussion for another trip to Crew Stadium for a state title.

Oregon
Boys
Woodburn (15-0-2): While Portland Jesuit occupies the loftiest soccer spotlight in the state, Woodburn has had no equal in Oregon in Class 5A over the past three seasons, capturing the state crown in each of those seasons. Woodburn scored 29 fewer goals in 2012 than it had the year before, but it was as stout at the back as it had ever been. The bonus for Woodburn as it enters the soggy Oregon fall season revolves around the return of utility super-stud Michael Hobson. The track star played myriad positions last season and scored nine goals and three assists. His versatility for the state's preeminent high school power is invaluable.

Girls
Thurston (Springfield) (17-0-1): From 1977-2011, only one school from outside the greater Portland area had won the big-school Class 6A state title. Thurston, which is in a Eugene suburb, became the second last season with a 2-0 win over Clackamas. The deck is continually stacked against big schools from other parts of the state, which typically struggle against Portland-area squads. Thurston broke the deadlock and became the first to do it since 2004. All eyes are glued for the chance at a repeat, which would join them with fellow Eugene-area big school Sheldon, which accomplished the feat a decade ago.

Pennsylvania
Boys
Upper St. Clair (22-2-1): High school soccer in the Pittsburgh area doesn't get much better than what Upper St. Clair provided the last couple years. USC took home the Class AAA title last season with an utterly dominant season, and a host of key returners are back. Throw names like Troye Kiernan, Hayden Bernhardt and Garrett Blake into that mixer along with Joe Hart, who's already committed to American University. Last year marked USC's first state title since 2003-2004 and third overall. A fourth this season is not out of the question.

Girls
Peters Township (McMurray) (21-1-0): Can you say dynasty? The Indians became the second girls team in state history to win three straight Class AAA titles when they beat Cumberland Valley 1-0 last year. If they do it again this fall, they'll be in rarified air as the first team in Pennsylvania history to ever win four in a row. Virginia(w) commit Veronica Latsko has been along for the ride the entire way with 107 goals over her first three seasons. Another 30-plus goal season and Peters Township could be celebrating something in November that nobody in state history has.

Rhode Island
Boys
Barrington (10-0-4): As the winners of the first three state titles in RIHSS boys soccer history in the 60's, Barrington and Rhode Island soccer are intrinsically linked. So it was somewhat appropriate that Barrington returned to the top in 2012 to win its state-best 12th Division 1 state crown. Barrington's thrilling 3-2 win over La Salle gave them the title, and the Eagles are poised to do even more damage in 2013. Two of their three All-Tournament selections were juniors last year: striker Denali Sexton and midfielder Jozef Jennings.

Girls
La Salle Academy (Providence) (9-3-4): It doesn't get any bigger in Rhode Island girls soccer than La Salle. The Rams have shaped the game in the state since 2001, winning nine of the last 12 Division 1 state titles and producing seven of the past 12 Gatorade players of the year. That includes a five-peat, a separate four-peat and five unbeaten seasons. It did not, however, include last season, when eventual champion Smithfield bumped La Salle in the state semifinals. Coach Lindsay Longval is back for her fourth season in search of her third state title.

South Dakota
Boys
Yankton (7-2-1): For the first time since 2005, Yankton won the South Dakota Class AA state title. The Bucks got three goals in the first half to sprint past Spearfish to capture a 3-0 victory last October. But perhaps an even greater accomplishment was waiting in the wings. South Dakota United Barcelona won the boys U17 US Club Soccer national title in July, and a handful of Yankton players were integral cogs on the team. That starts with Yankton senior captain Derek Brenner, the son of coach Warren Brenner, who coached both SDUB and the Yankton high school squad.

Girls
Roosevelt (Sioux Falls) (11-0-2): It had been 10 years since Roosevelt had sat atop the South Dakota girls soccer globe. That changed in 2012, as the Rough Riders bested Lincoln 1-0 to capture the Class AA title. A 4-0 win over Yankton and a 2-1 PK win over Pierre set up the title game, and the highly touted Nicole Hatcher carried them through. Hatcher had five goals and eight assists in Roosevelt's 5-0-1 start to the season, and the all-state dynamo returns for her junior season.