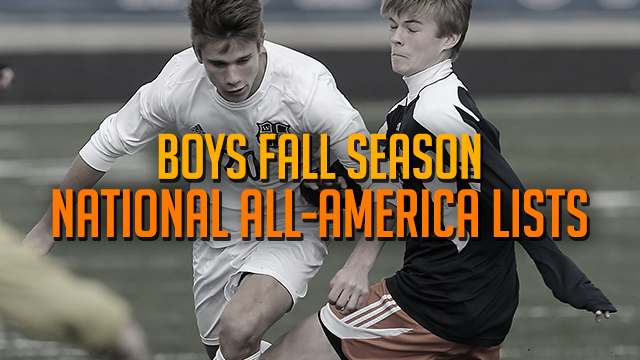 The North Carolina State Player of the Year netted a staggering 56 goals during his senior season. In only two years of high school play, Mbuyu scored 91 goals and added 37 assists.

A native of Accra, Ghana, where he attended the Right to Dream Academy, brought his dazzingly style to the U.S., and he scored 85 career high school goals. Opoku was uncommitted until after an MVP performance at the High School All-American Game sparked national recruiting interest.

Anderson was a two-time Sierra Foothill League MVP. He guided Granite Bay to a section semifinal appearance in 2014, and a 19-2 record. He facotred in 15 goals. Anderson also was named co-MVP for the West in the High School All-American Game.

2014 was a championship year for Asiedu, a former US Soccer Residency member. He helped PDA win the Development Academy Under-18 national title in July, then followed that up by leading St. Benedict's Prep to a 26th straight stte title and a SIMA FAB 50 No. 1 ranking for the fall. Asiedu, a defensive midfielder, scored the lone goal in St. Benedict's 1-0 state final win over Peddie School.

Ilgin, who moved to the U.S. from Turkey five years ago, delivered 20 goals and 12 assists, pushing his career totals to 56 and 67, while leading Mattituck to the New York Class B state title. Ilgin backed out of an NCAA Division I commitment to pursue a professional career, signing with the New York Cosmos and playing the spring in the NPSL.

The two-time Baltimore Sun All-Metro Player of the Year contributed 23 goals and 21 assists as McDonogh posted a 19-1 record. He was part of the McDonogh team that posted a perfect record in 2013 to finish No. 1 in the SIMA FAB 50 fall rankings.

The of the nation's top prospects also was among the most versatile. Atuahene spent time as defender and forward during the season, and did the same in the High School All-American Game, where he scored a goal then retreted to a defensive role for the rest of the match, where he was named the East MVP. He ended with more than 40 career goals and 25 assists in high school.

Souder was named the Missouri Class 4 Defender of the Year after helping Lee's Summit to a 21-3 record and the Class 4 state title. He was a two-time first-team all-state selection, and contributed 15 goals and eight assists as a senior.

Watson is a physically imposing defender who played a key role as South Kent School won the NEPSAC Class B title. Watson is a two-time selection to the Connecticut Soccer Coaches Association first team. He scored three goals and handed out four assists.

Forbes set a New Jersey state record with 1,559 consecutive shutout minutes, a stretch that started in 2013 and finished in 2014. The senior anchored a defense that has helped Delbarton to three straight state titles.

Brock walked away as a champion, and deservedly so. The all-time winningest high school coach in Massachusetts announced his retirement in March, just months after guiding Needham to a fifth state title. The 78-year-old Brock started Needham's program in 1961, moved to another school for a year and returned to Needham for a run that lasted more than 50 years. He retires with a career record of 696-180-127. His teams won 20 conference titles, 15 sectional title, 10 Eastern Mass titles and five state titles.

Fall Player of the Year