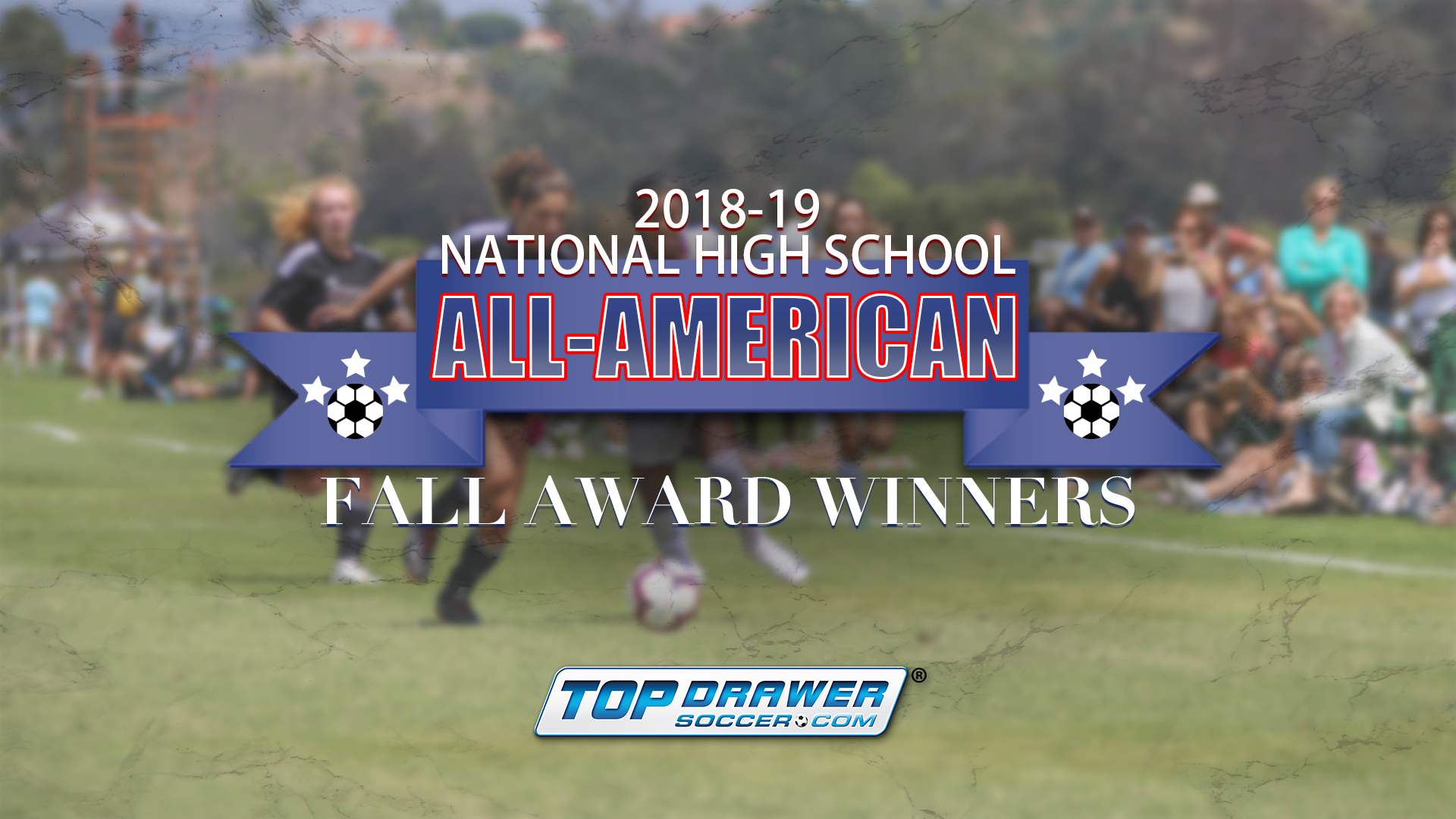 The TopDrawerSoccer Fall All-America teams are selected from the 88 regional honorees and are compiled by TopDrawerSoccer with consultation with coaches and media members from around the country. Players from all 34 fall-playing soccer states are eligible for consideration.

The Stanford signee graduated as the No. 10 prospect in the Class of 2019 IMG Academy 150. Bouda, a repeated TopDrawerSoccer first-team All-America selection, scored a staggering 61 goals as a senior while leading Millbrook to the NEPSAC Prep C title. Bouda was named the New England Soccer Journal Player of the Year. Bouda finished his three-year high school career with 156 goals.

Pompeu was one of the nation's top high school prospects, leading St. Benedict's to back-to-back FAB 50 titles. The VCU signee led the GrayBees to an 18-0 season. The forward/midfielder finished with 15 goals and 22 assists. He originally committed to UCLA, but changed his decision in the spring.

The repeat TopDrawerSoccer All-America selection closed out a stellar career with a 16-goal, 12-assist season as Berkshire went undefeated, winning the NEPSAC Prep A title and the TopDrawerSoccer Prep Top 10 No. 1 ranking. Shaffelburg is the No. 12-ranked player in the Class of 2019 IMG Academy 150. The four-year Berkshire player is the only member of this year's All-America team who jumped straight from high school to the pros. He originally signed with Toronto FC II and more recently has been signed by Toronto FC where he has seen action already for the MLS squad.

The Boston College signee scored 20 goals and had 10 assists for his senior year. He finished his high school career with 80 goals and earned TopDrawerSoccer All-America honors for a second straight year. His final high school goal came during the High School All-American Game in December where his score jumpstarted the East victory. Suski was named East MVP.

The Saint Louis signee was a Columbus all-area first-team selection. He finished with 11 goals and 13 assists while leading recent Columbus power St. Charles to a regional runner-up finish.

The Michigan signee was the Cincinnati Enquirer Division III Player of the Year. Callow starred in the High School All-America Game as a defender, but during the season he was an attacking player. Callow finished with 26 goals and eight assists.

The Akron signee was the defensive mid who drew praise from opposing coaches. Cruz, a native of Brazil, helped St. Benedict's to an 18-0 season in which the powerhouse program allowed only five goals during the season. Cruz scored five from his defensive mid position.

Verley was one of the nation's most coveted prep recruits, and he ended up signing with Virginia. Verley missed part of the high school season while playing for Jamaica’s Under-20 National Team. Still, Verley was named the Independent Schools League Player of the Year. He had seven goals and four assists.

The Northwestern signee was Berkshire's most versatile performer. He is a lightning-quick attacking player who also played defender. Achara was listed as a defender/forward for the High School All-American Game and ended up scoring a pair of goals. He netted 21 goals as a senior. The four-year Berkshire player is the younger brother of Georgetown standout Ifunyachi Achara, who also was a High School All-America selection.

The Bowling Green signee is an attack-minded defender who scored game-winning goals in Naperville North's last two state titles. His winner during the 2018 season helped the team cap a perfect 26-0 season. While anchoring a defense that recorded 22 shutouts in 26 games, Iverson also found himself in the attack and ended with 18 goals. He was the Naperville Sun and Chicagoland Soccer Player of the Year.

The Xavier signee was one of only four Class of 2019 IMG Academy 150 players to play fall high school soccer. He was the nation's No. 100 prospect in the Class of 2019. The Baltimore Sun All-Metro first-pick led Loyola to an 18-1 season, losing only in the MIAA final to fellow national power McDonogh School.

The 6-foot-7 keeper allowed only four goals as Naperville North compiled a 26-0 record, marking the first perfect season in Illinois state championship history. Welch, the state's player of the year in 2017, gave way to his teammate -- Colin Iverson -- for the 2018 award, but they are nearly impossible to separate. Welch had 20 shutouts, giving him 42 for his career, and he sported a 0.16 goals against average in 2018. He is a three-time all-state selection and a Division I soccer prospect; however he opted to sign with Loyola-Chicago for men's basketball.

The nation's all-time winningest high school soccer coach continues to find ways to push the bar even higher. This season he guided Christian Brothers to a 25-2-2 record and an ninth state title during his 48-year tenure. Michler has won 990 matches and 1,000 is within reach next season, despite CBC graduating a stellar senior class.

PLAYER OF THE YEAR: Ousseni Bouda