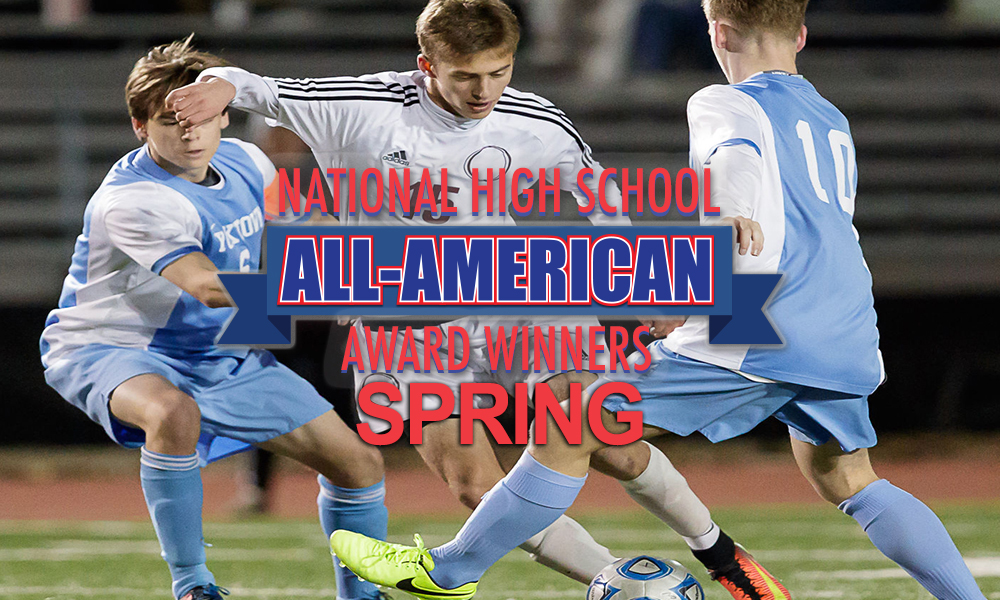 The TopDrawerSoccer.com Spring All-America teams are compiled by TopDrawerSoccer with consultation with coaches and media members from around the country. Players from all 13 spring-playing soccer states are eligible for consideration.

The Clemson signee was the No. 41 prospect in the final Class of 2018 IMG Academy 150. Barber, who returned to high school soccer for his senior year after a stint with Sporting Kansas City Academy, scored 38 goals and added 10 assists to help Cardinal Newman to a state runner-up finish.

The Virginia signee was the Oklahoman All-City Player of the Year. After missing several matches early due to injury, Dike returned to score 19 goals and lead the squad to the Class 6A state semifinals where it fell in a shootout to FAB 50 No. 2 Tulsa Union.

The College of Charleston signee capped a stellar high school career on a 54-match win streak, back-to-back state titles and back-to-back FAB 50 spring national No. 1 honors. As a senior, Marino netted 36 goals and added 18 assists. He was named the South Carolina Class 4A state player of the year.

The Memphis signee scored 16 goals and had eight assists, leading Station Camp to a 23-2-1 season and a second straight state title. He's a three-time all-county selection and was named the state's Player of the Year. Gebregzabher spent four years in a refugee camp before coming to the U.S.

The Utah Valley signee scored a classification best 20 goals to lead Herriman to a 19-1 season and a state runner-up finish. Johnson was a unanimous state player of the year choice. The four-year varsity player led Herriman to a better win-loss record every year during his career, going from 7 to 10 to 15 to 19.

The Washington signee was the Washington Class 1A Player of the Year. He led Royal to a 19-3-1 season and a state semifinal appearance. Rojas had 19 goals and seven assists. He also played a defensive role for the team that posted 17 shutouts in 23 matches.

The Notre Dame signee was The Washington Post and Virginia High School Soccer Coaches Class 6A Player of the Year. Silver led Oakton to an 18-1-2 record and a Class 6A state runner-up finish. He had eight goals and 11 assists as a defensive midfielder.

The Virginia Tech commit was an All-Tidewater first-team choice after helping First Colonial to a Class 6A state tournament appearance. He scored six goals, two of them were game-winners during the playoffs. He netted the overtime goal that lead First Colonial to regional semifinal win over previously undefeated Grassfield.

The Santa Clara commit was a Richmond Times-News first-team selection after leading Cosby to a state title. The former Jamaican Under-17 National Team performer had a team-high 10 goals and 10 assists while playing the left back position.

The Air Force signee was a three-time all-region Defender of the Year honoree. Spaid anchored a Chattahooche defense that won back-to-back state titles.

The Lehigh signee was a two-time Richmond Post-Dispatch first-team choice. He recorded 11 shutouts as a senior and had a 0.35 goals against average as James River posted a 17-2 record.

The spring brought about a series of highs and lows for the veteran coach at Blacksburg. Just before the season started, his brother passed away. The community rallied to raise $2,500 for the Amyloidosis Foundation in Steve Blumenthal’s memory, starting a series of highs that ended with a perfect season and a state title. In order, Blumenthal, in his 25th season at Blacksburg, collected win No. 500 in the team's fifth game of the season. At the same time, the school unveiled plans for "Blumenthal Byway," giving a name to a road on school property leading to the stadium. After win No. 500, Blacksburg rolled off 17 more victories for a 22-0 season and the program's 13th state title -- 12th under Blumenthal. He has a career coaching record of 517-41-20. In addition to the 12 state titles, Blumenthal's teams have nine runner-up finishes and 23 regional titles.

PLAYER OF THE YEAR: Charlie Marino