The TeamSnap Spring All-America teams are compiled by TopDrawerSoccer with consultation with coaches and media members from around the country. Players from the 13 spring-playing soccer states are eligible for consideration.

Barry, who was recently called into the U.S. Under-19 National Team camp, led Tyee to the state tournament behind a 34-goal season. Barry plays for the Seattle Sounders Academy and is one of the top remaining uncommitted seniors as the school year wound down. He was a Seattle Times All-Metro first-team selection.

Labovitz returned from a year in Europe to guide Langley to a second state title in three years. The Fairleigh Dickinson signee scored a state-best 46 goals en route to being named The Washington Post Player of the Year. As a sophomore, he scored 26 goals to lead Langley to a state title. He spent his junior year in Europe, playing and training with clubs in Spain, the Netherlands and Hungary.

The Northwestern signee delivered 36 goals and 12 assists to lead McCallie School to a 14-1-4 record and a Division II, Class AA state title. Viscomi had a goal and one assist as the Blue Tornado edged Montgomery Bell Academy 3-2 in the final to shake a recent postseason jinx. Viscomi finished his career with 89 goals and 35 assists.

The Virginia signee was a three-time All-Timesland Player of the Year. As a senior, Donasiyano had a goal and/or assist in 17 of the tea's 19 games en route to an 18-1 season. He scored three goals in a region quarterfinal win over Stone Bridge and had the game-winning score in the Conference 16 final against Albemarle. He finished his career with 65 goals.

The defensive-minded defender helped Creighton Prep to a 19-3 state championship-winning season. Creighton Prep shutout all three playoff opponents. Gordon, who has signed with Omaha, had three goals and three assists, and was named the Omaha World Herald State Player of the Year.

The Clemson signee netted 30 goals and eight assists while leading J.L. Mann to a state runner-up finish in South Carolina's large school classification. McNeill was a first-team all-state selection by the coaches.

The Washington signee netted 19 goals and dished out three assists as Mercer Island put together a 16-3 season. Meek played for Eastside United, before joining the Seattle Sounders Academy. He gave up Academy soccer to play high school this past spring.

Like teammate Jacob Labovitz, Golan returned to the high school game in 2017 after a stint in Europe and helped Langley deliver a state title and final No. 2 national ranking. Golan split his time between attacking mid and center back. He was a Washington Post All-Metro first-team selection and has signed with William & Mary.

The Bradley signee led a defense that posted 15 shutouts en route to a 16-2 season. Dunn was a Des Moines Register All-State selection the past two seasons.

The Creighton signee was The Tulsa World Player of the Year after helping Bishop Kelley to a 16-3 season and a state title. Wormell posted 12 shutouts and allowed only four goals in 13 matches against Class 5A opponents.

After coming tantilizingly close in recent years, Wando put it all together for a perfect season and a SIMA FAB 50 national title in 2017. Wando has held the No. 1 ranking several times over the past five years, but never finished on top until this season. Tisdale has a career coaching record of 270-31-2 at Wando. 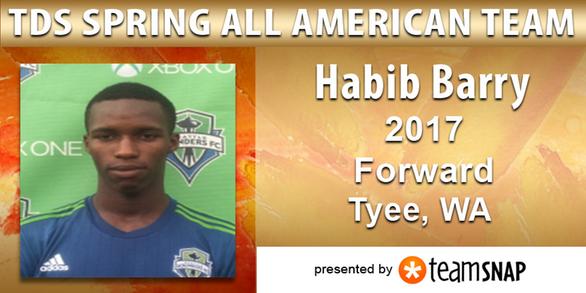