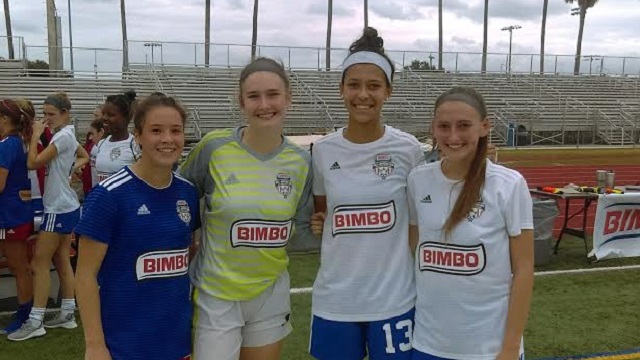 The following players were identified by the coaching staffs are have the best performances at the High School All-America Game on Saturday, Dec. 1, in Winter Park, Fla. The West won the match 3-0.

F: Colleen McIlvenna, Summit Country Day (Ohio), Sr., Tennessee: Her speed and ability to go to goal were impressive. She helped the West quickly get into the attack with her first touch. She was an explosively quick player.

F: Brittany Raphino, Thayer Academy (Mass.), Sr., Brown: Raphino used her speed and 1v1 ability to create some of the best chances of the day for the East. She was very effective coming down the flank.

M: Katelyn Duong, Portland Jesuit (Ore.), Sr., Minnesota: Perhaps the best player on the field Saturday. She quarterbacked the West team, had a great work rate and then delivered a cracker of a goal. Coaches also like her footwork on the ball. She was the co-MVP for the West.

M: Maddie Kemp, Camas (Wash.), Sr., Gonzaga: Although she did not score, Kemp was one of the most dangerous players on the field. Even the opposing coach said she cringed every time Kemp got the ball.

M: Camryn Lexow, Abington (Pa.), Sr., Virginia: Lexow was among the most versatile players at the game. She spent time at outside back, center mid and forward. In fact she told the coaches to play her where ever they needed her and she directly created of the East's three best scoring chances on the day.

M: Cara Young, Houston (Tenn.), Sr., Arkansas: A smart player with a huge throw-in is the best way to sum up Young. She scored the first goal of the match by making a backside run that many midfielders might have passed on. Her long throw-ins are a weapon.

D: Elizabeth Franklin, Seattle Prep (Wash.), Sr., Notre Dame: Franklin very strong and great with her feet. As one coach put it, "I didn't want to take her off the field." She also was a team player. With the high number of attacking players on the roster, Franklin asked the coaches to play defender -- where she projects in college.

D: Olivia Homan, Northern Highlands (N.J.), Sr., Fairfield: Co-MVP for the East. Playing both center and outside back during the match and seldom came off the field. She was a strong communicator.

D: Sydney Moore, Farmingdale (N.Y.), Sr., Boston College: Co-MVP for the East. Moore anchored the East defense and seldom left the field. She worked well with the other backs.

D: Madison Stenslie, Faith Lutheran (Nev.), Sr., Oklahoma: One of several very good defenders on the West, each of whom could have claimed a spot on this list. But Stenslie's personality and calming affect was noticed by the coaches who said her play and attitude helped the other defenders relax.

GK: Gabrielle Dawe, Houston (Tenn.), Sr., Kansas: While the game was still in question, Dawe came up with three big saves to keep the West in control. Although she only played half of the match, she was named Co-MVP for the West.