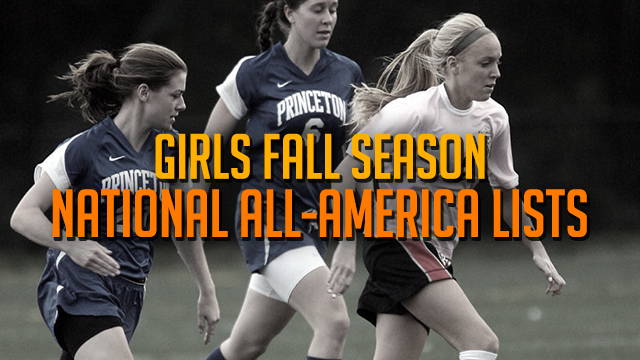 Already a three-time All-State first-team pick, Andrzejewski led McDonogh to a perfect season and a SIMA FAB 50 No. 1 fall ranking. The standout forward had 32 goal and 11 assists while playing 13 matches. She has 76 career goals, which ranks second in school history to former professional/National Team/North Carolina performer Laurie Schwoy. Like many of the other first-team selections, Andrzejewski is a member of the U.S. Soccer Under-20 National Team player pool.

The two-time Press Democrat Player of the Year, Gonzalez has led Maria Carrillo to a 60-0-2 run during her three years. The programs sports a 72-match undefeated streak heading into the 2015 season. During the 2014 campaign, Gonzalez had 23 goals and 21 assists. Over the past two years, she's been involved in 80 goals (44 goals, 36 assists).

The Newark Star-Ledger and MSG Varsity Player of the Year also is a Under-20 National Team participant. Kerner scored 21 goals in 2014, capped with a hat trick in a state final win over Colts Neck. During her four-year run at Northern Highlands, she helped the team to a 93-1-1 record, which included an 88-match undefeated streak and a 65-match win streak.

Martin delivered 29 goals and 27 assists while leading Brebeuf Jesuit to a 22-1 season. She finished her career with 65 goals and 62 assists. Martin is part of the U.S. Soccer Under-20 National Team player pool.

Carreiro scored 11 of her 28 goals during the playoffs, leading Nipmuc to a state title and a 22-1-1 final record. She also added 12 assists. She was a two-time conference player of the year and is a member of the U.S. Soccer Under-20 National Team.

One of the nation's top prospects, Racioppi delivered an MVP performance at the High School All-American Game in December. During the high school season, she scored 20 goals and added five assists. Racioppi plays for the U.S. Soccer Women's Under-20 National Team, and she scored a goal against Brazil last month as the U.S. took second in the NTC Invitational.

Zandi scored 22 goals and added eight assists in 15 matches with West Chester Henderson. She missed four matches due to U.S. Under-17 National Team obligations. She is already a two-time first-team all-conference selection.

A past captain of the Under-17 National Team and a member of the Under-20 National Team, Cook also is a two-time Prep Player of the Year in New Jersey. Despite playing central defender, Cook got into the offensive end as well, finishing with 12 goals and eight assists.

Schmidt was a co-MVP for the West squad at the High School All-American Game. A four-year varsity player, Schmidt has served as team captain for her high school squad, along with her ECNL club team and the US Youth Soccer Region II ODP team. She had seven goals and assists during her high school career.

Leshnak posted 11 shutouts and was named the Greater Cincinnati Catholic League Player of the Year. Leshnak is a member of the Under-20 National Team, and was recently rostered during the team's second-place finish at the NTC Invitational.

Silva replaced a coaching legend at IHA and is setting quite a high bar after only two seasons. Silva's IHA squd went 22-0 in 2014, pinning the only losses on perennial powers Northern Highlands (to end the team's 88-match undefeated streak) and Massapequa (N.Y.), the team's lone loss in a state title season. Silva sports a 41-2-1 record at IHA after taking over for Steve Silver, who went 313-38-7 during his tenure at the school.

Fall Player of the Year