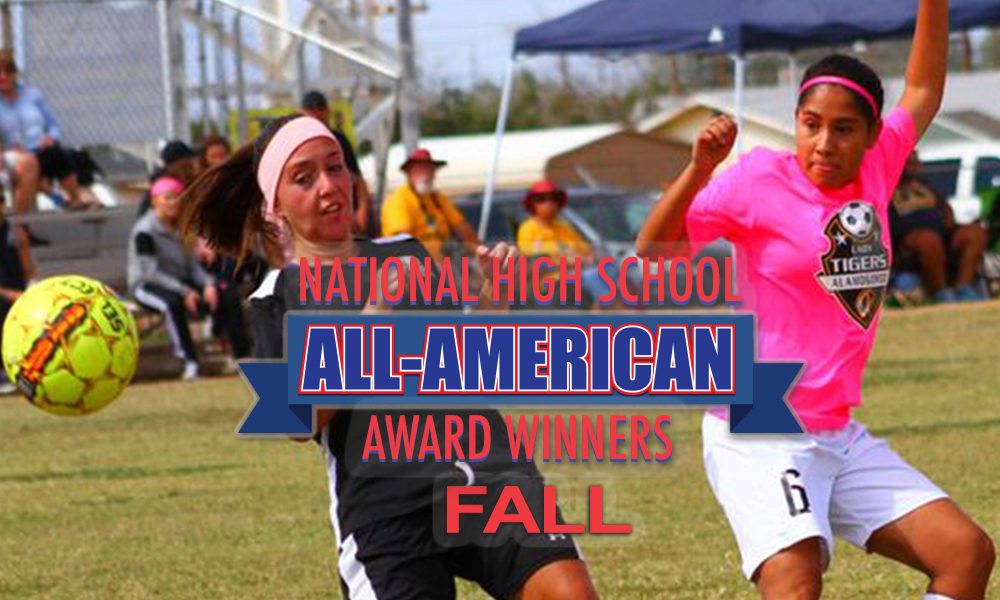 The TeamSnap Fall All-America teams are compiled by TopDrawerSoccer with consultation with coaches and media members from around the country. Players from all 34 fall-playing soccer states are eligible for consideration.

The Boston College signee was a four-time Independent School League (ISL) all-league selection and the MVP her junior and senior seasons. Duran, who has been part of the US Under-17 National Team player pool, scored 25 goals and added 10 assists as a senior, leading BB&N to a NEPSAC Prep A runner-up finish.  She was the No. 134 prospect in the final Class of 2018 IMG Academy 150.

The Florida State signee netted 44 goals, but it was her 18th and 19th assists of the season that vaulted Penn to a second straight state title, an undefeated season at 23-0-1 and a FAB 50 national title. She was the Indiana Soccer Coaches Association Miss Soccer for 2017, an honor reserved for the state's top senior. Lynch finished her career with 130 goals and 68 assists. Lynch was the No. 63 prospect in the final Class of 2018 IMG Academy 150.

The Arkansas commit was named Ohio High School Soccer Coaches Association Division II Miss Soccer. Podojil has been part of the Under-18 National Team player pool. During the high school season, she scored 38 goals to lead Indian Hill to a 22-0-1 season and a state title. Podojil is the lone junior on this year's Team Snap All-America first team.

The Louisville signee scored a staggering 56 goals and added 27 assists, leading Moon to a perfect season and a second straight state title. Moon was 51-1 over the past two seasons. She scored the only goal in a 1-0 state final win over Villa Joseph Marie. Snyder was named the Pittsburgh Post-Gazette and Pennsylvania Soccer Coaches Association Player of the Year. She ended her career with 137 goals and 101 assists.

The Washington signee was the No. 4 prospect in the final Class of 2018 IMG Academy 150. Yates has made appearances, including training camps, for the Under-20, Under-19 and Under-18 National Teams during the past year. Still, she managed to play high school soccer, where she scored 24 goals to end with an even 100 for her career. Yates missed four matches early in the high school season while playing for the US Under-19 National Team in China.

The Michigan signee was selected as the Minnesota Soccer Coaches Miss Soccer following a 19-goal, 10-assist senior season. She led Maple Grove to a 20-3 season and a state runner-up finish. She was the No. 38-rated player in the TopDrawerSoccer Class of 2018 player rankings.

The Notre Dame signee balanced national team duties with high school play this past fall. Martinez and fellow first-teamer Summer Yates were the two high school-playing seniors who made the most appearances with the Under-18 National Team this past year. Martinez still helped Volcano Vista to a state semifinal showing in 2017, scoring 10 goals from the midfield position. She was the No. 19 prospect in the final Class of 2018 IMG Academy 150.

The Princeton signee led Wall to a 25-1-1 record, the New Jersey Group 2 state title and the state's No. 1 ranking by TopDrawerSoccer. Paternoster had 29 goals and 20 assists. She is a two-time first-team all-state selection. Paternoster ended her career with 94 goals and 53 assists.

The California signee is a repeat TeamSnap first-team All-America selection. Collins anchored a Jesuit defense that allowed only two goals en route to a 19-0 season. She scored three goals and added five assists, meaning she scored more goals as a defender than her team allowed. She was the No. 110 prospect in the final Class of 2018 IMG Academy 150.

The Michigan signee was primarily a defender who was able to move to midfield and forward when needed. The US Youth National Team pool player, Joyner ended her high school career with 30 goals and 23 assists. She was among the standout performers at the High School All-American Game in Celebration, Fla. Joyner was the No. 100 prospect in the final Class of 2018 IMG Academy 150.

The Northwestern signee returned to an already loaded Penn lineup, helping the team to a second straight undefeated season and state title. Penn finished as the Fall FAB 50 No. 1 team. Wood had 20 shutouts her senior season, giving her an Indiana state record 49 for her career, despite skipping her junior season to focus on club soccer. Wood allowed only four goals in 24 matches. She was scheduled to play in the High School All-American Game until she was named to US Under-18 National Team training camp on the same weekend.

The architect of one of the fall's most dominant programs, Wolff is this year's National Coach of the Year. He guided Houston to a 25-0 season in 2017, which caps a four-year run of 85-2-4. With nine returning starters in 2018, Houston seems poised to extend its undefeated streak. Wolff, who also coaches the school's boys varsity team in the spring, has an all-time girls coaching record of 358-65-40, which includes 198-15-10 at Houston. His Houston teams are a combined 183-9-9 since 2009, his second year with the program. Wolff has a 325-96-49 all-time boys record, giving him 683 combined wins with 12 state titles.

PLAYER OF THE YEAR: Kristina Lynch