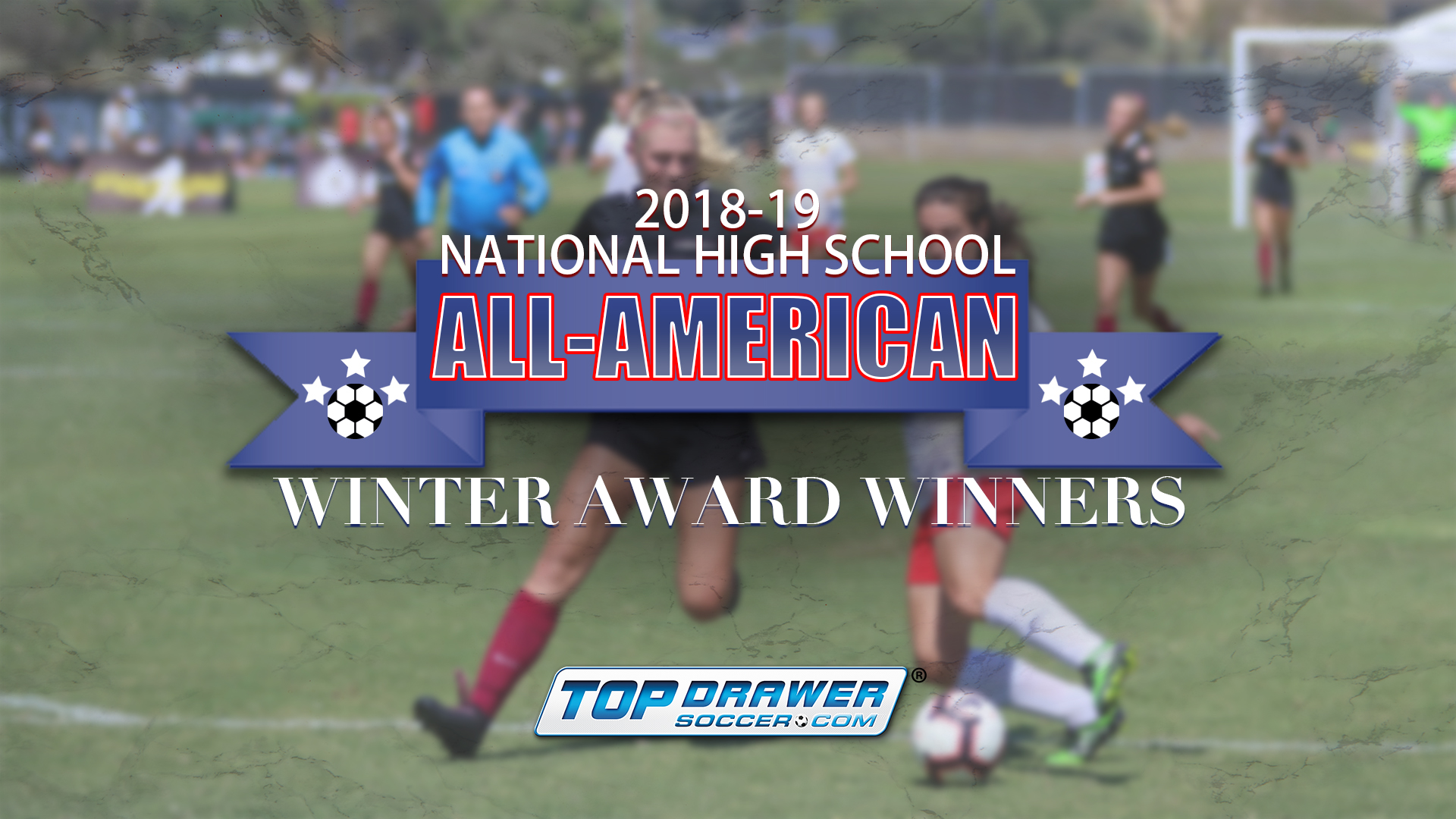 Brown was the Orlando Sentinel Player of the Year and the Florida Dairy Farmers Class 4A State Player of the Year. A member of the Jamaican Women's National Team, Brown led Montverde to a 20-0 season with 31 goals and nine assists. Brown entered as a sub in all three of Jamaica's World Cup matches in June. Last summer Brown was named to the Best XI at the Concacaf championships. She is the No. 76-ranked prospect in the Class of 2020 IMG Academy 150.

The Santa Clara signee scored 33 goals with 13 assists to lead JSerra to a 22-0-3 season and a TopDrawerSoccer FAB 50 Winter No. 1 final ranking. D’Aquila is a three-time CIF Southern Section Division 1 Player of the Year. Her high school career ended with a section title over Los Alamitos, and JSerra went on to win the SoCal region title while D’Aquila was playing for the U.S. Under-20 National Team. She was a member of the U.S. Under-17 National Team that played in the U-17 World Cup in 2018. D’Aquila is the No. 18-ranked prospect in the Class of 2019 IMG Academy 150.

The Stanford signee scored 24 goals to lead Davis an undefeated regular season. The team took its only loss while Doms was playing for the U.S. Under-20 Women’s National Team. Doms was a member of the U.S. Under-17 National Team that played in the U-17 World Cup in 2018. Doms is a two-time TopDrawerSoccer first-team all-America selection.

The UCLA signee was the leading scorer for the U.S. Youth National Team in 2018, and Fontes delivered on the high school scene, as well, scoring 25 goals. She was named the Honolulu Star-Advertiser’s Player of the year. Fontes was a member of the U.S. Under-17 National Team that played in the U-17 World Cup in 2018. Fontes is the No. 5-ranked prospect in the Class of 2019 IMG Academy 150.

The Santa Clara commit was an Orange County Register and CIF Southern Section Division 1 first-team selection. She was part of a JSerra defense that recorded 17 shutouts and allowed only nine goals against a high-level schedule en route to a 22-0-3 season. Bastone is the No. 68-ranked prospect in the Class of 2019 IMG Academy 150.

The Duke signee joined the high school team for her senior year and quite amazingly flipped Menlo School from a below-.500 program to a section title winner. The senior star had 18 goals and 16 assists, but the major measure was Menlo went 20-2-2 in 2019, compared to 7-10-2 without Jones the previous season. Jones was a member of the U.S. Under-17 National Team that played in the U-17 World Cup in 2018. Jones is the No. 3-ranked prospect in the Class of 2019 IMG Academy 150.

The California signee was named the Manteca Bulletin Co-Player of the Year after scoring 47 goals with 23 assists for a 28-3-2 team. She ends her high school career with a school record 155 goals. Shinn is the No. 40-ranked prospect in the IMG Academy 150.

The Oklahoma signee was a driving force in Southlake Carroll's 28-1-2, state title-winning season. Tufts was named the Dallas Morning News Offensive Player of the Year. She scored 31 goals and served up 24 assists as Dragons finished No. 3 in the Winter FAB 50.

The St. Mary's (CA) signee led Livermore to the North Coast Section Division II final. An offensive-minded defender, she finished the year with eight goals and 12 assists. Farro is the No. 113-ranked prospect in the Class of 2019 IMG Academy 150.

The UCLA signee helped San Ramon Valley to the CIF North Coast Section final. She was used in the attack on set pieces and finished the year with nine goals and four assists.

The Stanford commit repeats as the TopDrawerSoccer.com Winter All-America first-team keeper. Campbell was an Orange County and CIF Southern Section Division 1 first-team honoree. Campbell recorded 17 shutouts in a 22-0-3 season. She is the No. 16-ranked prospect in the Class of 2020 IMG Academy 150.

Colvin looks back and laughs about it now, but his debut at Southlake Carroll was less than spectacular. The young coach came in with high expectations only to see the team lost its first two matches in that 2001 season. After an encounter with the school's AD, which told him Carroll doesn't go 0-3 in any sport, Colvin's team won the next match -- and the winning has continued ever since. The Dragons went 28-1-2 in 2019 and claimed the Class 6A state title. Colvin's record stands at 382-75-36.

PLAYER OF THE YEAR: Isabella D'Aquila