The TeamSnap Fall All-America teams are compiled by TopDrawerSoccer with consultation with coaches and media members from around the country. Players from the 34 fall-playing soccer states are eligible for consideration.

The Stanford signee scored the lone goal in Bellevue's 1-0 state final win over Southridge in the Class 3A final. The result sealed a 19-0-2 and gave Bellevue a first-ever state title. Harber was named the Class 3A State Player of the Year by the Washington Scholastic Soccer Coaches Association and a first-team All-Metro selection in the Seattle Times. She is the No. 28-ranked player in the 2017 IMG Academy 150. Harber is part of the U.S. Under-18 National Team player pool.

The Florida State commit delivered a blockbuster season in 2016, scoring 38 goals and assisting on 26 while leading Penn to a 22-0-1 season and a state title. Lynch has 86 career goals and 49 assists, and is avergaing 1.25 goals per outing during her career. Penn finished No. 2 in the SIMA FAB 50 fall rankings and will be a frontrunner for a preseason No. 1 ranking in 2017.

The Penn State signee scored 22 goals and handed out eight assists despite missing a number of matches while playing for the U.S. in the U17 Women's World Cup in Jordan. She was named the team's MVP and was a first-team All-Shore and first-team Newark Star-Ledger All-State selection. She finished her high school career with 81 goals and 40 assists. Tagliaferri is the No. 5-ranked player in the 2017 IMG Academy 150.

The BYU commit was named the Salt Lake Tribune Player of the Year and Dessert News 5A MVP after helping Davis to a second straight undefeated season and a SIMA FAB 50 fall national title. Wade scored 42 goals and added 22 assists as Davis went 20-0. Davis is riding a 44-match undefeated streak and has won the last three Utah 5A state titles. Wade is the No. 20-ranked player in the 2018 IMG Academy 150.

The South Carolina signee had 14 goals and 17 assists while leading Hunterdon Central to a 21-1-1, a first-ever group title and a state final No. 1 ranking. Zullo was named State Player of the Year by the Newark Star-Ledger.

The USC signee was a two-time Best of Nevada Preps first-team all-star selection. She helped Bishop Gorman to a 21-3-1 record in 2016, and she finished her career with 57 goals and 31 assists. Jones is the No. 23-ranked player in the 2017 IMG Academy 150. She has been part of two national title-winning club teams, one in ECNL and the other with US Club Soccer. Jones has made a number of appearances with the U.S. U18 National Team.

The Michigan signee was named the Indianapolis Star Player of the Year. A four-year starter and two-time team captain, Martin helped Brebeuf to a state title in 2015 and a runner-up finish in 2016. Martin is the No. 36-ranked player in the 2017 IMG Academy 150. She is part of the U.S. Under-18 National Team player pool. She finished her high school career with 42 goals and 70 assists.

The Duke signee was one of the two MVPs at the High School All-America Game after a one-goal, one-assist performance. She had 18 goals and 13 assists this past season to finish her career with 84 goals and 41 assists. Paschall missed two high school games in 2016 while competing for the U.S. U18 National Team. She is the No.10-ranked player in the 2017 IMG Academy 150.

The Wake Forest signee had a storybook high school career, winning state titles all four seasons -- scoring goals in all four finals. In fact, she scored the state title-winning goal during her freshman, sophomore and junior seasons, then tacked on an insurance goal in her senior year during the team's 2-0 victory. She finished with 29 goals and 14 assists on the season, 81 goals and 51 assists for her career. Rossi is the No. 107-ranked player in the IMG Academy 150.

The California commit anchored a defense that allowed only six goals during a 16-2-1 season. Collins is the No. 9-ranked player in the 2018 Pacific Northwest Region. Collins was a Metro League and Class 6A All-State first-team selection.

The Duke signee, ranked No. 32 in the 2017 IMG Academy 150 -- No. 5 among defenders, earned MVP honors along with Karlie Paschall at the High School All-America Game. Although a standout defender, Cosme added 36 goals and 12 assists during her high school career.

The USC commit delivered 15 shutouts for Skyline, which finished third in the Class 4A state playoffs. Skyline allowed only two goals in league play and five overall during a 15-1-4 season. Smith is the No. 39-ranked player in the 2018 IMG Academy 150.

A Glastonbury alum, Finocchiaro now guides this state powerhouse that won a third straight state title in 2016 and extended its state record win streak to 60 matches. Glastonbury four state titles in the past six seasons and Finocchiaro's teams have gone 119-3-3 during that run. 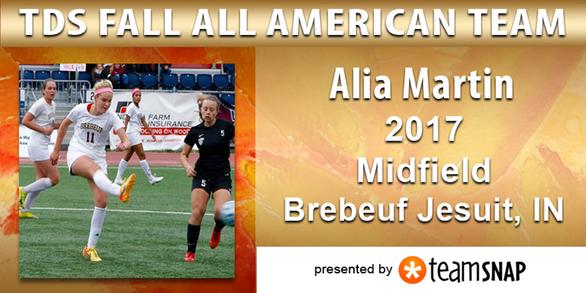