The TeamSnap Spring All-America teams are compiled by TopDrawerSoccer with consultation with coaches and media members from around the country. Players from the seven winter-playing soccer states are eligible for consideration.

The Texas Tech signee netted 53 goals and added 11 assists while leading Westminster Christian to an 18-2 season. Davis scored 13 game-winning goals and had 15 multi-goal outings. She was a St. Louis Post-Dispatch All-Metro first-team selection. Davis was part of the U.S. Under-18 National Team that traveled to Northern Ireland last October. She is the No. 97-ranked player in the 2017 IMG Academy 150.

The North Carolina commit scored 41 goals and had 11 assists in 13 matches as her high school play was put on hold while attending two U.S. Under-18 National Team camps. Jones had 10 multi-goal outings and seven games with four or more goals.

The Virginia commit and member of the U.S. Under-18 National Team player pool, Serepca scored 25 goals and had 35 assists. Her play helped Hough to a 20-2-2 season and a Class 4A state quarterfinal appearance. She has 82 goals and 68 assists in three years of high school play. She is the No. 12-ranked player in the 2018 IMG Academy 150.

The Penn State signee returned to the high school game as a senior and was an instant impact player. She 34 goals and had seven assists for the regional finalist. Thomsen was named to the Chicagoland Soccer All-State Team. She is the No. 30-ranked player in the 2017 IMG Academy 150.

The Washington commit netted 20 goals and had seven assist while powering ThunderRidge to a 13-3-1 season. She missed three high school matches while training with the U.S. Under-18 National Team.

The Arkansas signee was named the Tulsa World Player of the Year after leading a star-studded Tulsa Union team to a third straight state title. Malham had 17 goals and 12 assists and carried the banner while teammate Parker Goins recovered from an injury-riddled season. After back-to-back undefeated seasons and SIMA FAB 50 national titles, Union went 17-1 and settled in at No. 2 in 2017.

The North Carolina commit had 22 goals and 28 assists while helping Cardinal Gibbons to a state runner-up finish. Pierce was the Raleigh News-Observer All-Metro Player of the Year. She is a member of the U.S. Under-17 National Team player pool.

The Miami (Ohio)(w) signee was named the Chicagoland Soccer Player of the Year after leading Barrington to a 28-1 season, a state title and a SIMA FAB 50 No. 1 national ranking. Spinell scored 18 goals and served up 26 assists. She assisted the game-winning goal in the state semifinals and converted the game-clinching penalty kick in the state final.

The Virginia commit split times as both a forward and defender. Constant was named to the Washington Post All-Metro first team for the second straight year. She finished with 16 goals, many struck from distance. She is the No. 47-ranked player in the 2018 IMG Academy 150.

The Denver commit was part of the Grandview defense that led the team to a state runner-up finish in 2017. Parker scored three goals. She is a member of the U.S. Under-19 National Team player pool.

Shamburger, who has been part of the U.S. Under-16 National Team player pool, anchored a defense that posted 16 shutouts en route to a 20-1-1 state title-winning season.

The Oklahoma State commit is a repeat TeamSnap All-America selection after posting 15 shutouts in 18 matches in 2017. Warner finished her four-year varsity career with 52 shutouts and allowed only 13 goals in 66 career outings.

In a season where Stengren collected coaching win No. 200, it is No. 202 that will be long remembered. Barrington’s Super Sectional win was No. 200, but a week later the Broncos dethroned New Trier in a classic state final that went to a shootout. Barrington finished the season 28-1 and ranked No.1 in the SIMA FAB 50. 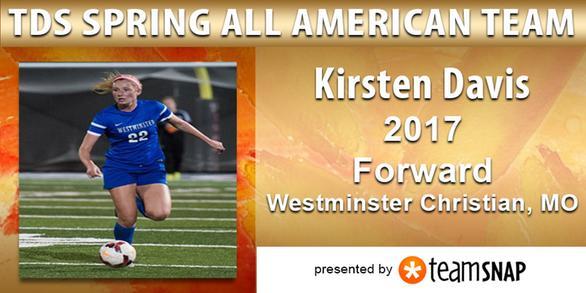