The TeamSnap Winter All-America teams are compiled by TopDrawerSoccer with consultation with coaches and media members from around the country. Players from the seven winter-playing soccer states are eligible for consideration.

One of the most prolific scorers to come through the Texas high school system in recent years, the Texas signee and U.S. Under-19 National Team player pool member scored 45 goals in 2017. Berg, who received national attention by committing to Texas as an eighth-grader, scored 109 goals in two high school seasons as Celina launched a girls program her junior year. Berg is the No. 27-rated player in the 2017 IMG Academy 150.

The Florida State signee was named the Fort Lauderdale Sun-Sentinel Player of the Year for the third straight season. During Dorosy's four-year varsity career, she played a pivotal role in three state titles for St. Thomas Aquinas, most recently a 2-0 championship win over Creekside in the 2017 4A final. She delivered 36 goals and 26 assists as a senior. Dorosy ends her career with 120 goals and 73 assists. She will join her sister, Dallas, who plays for Florida State.

The Florida State signee went out a winner -- although not as a state champion. Madril scored two goals in Navarre's 3-1 win over Ocean Springs (Miss.), giving her 107 for her career (along with 70 assists) and helped Navarre to an 18-1-1 record at that point. With just over five minutes remaining, she was subbed out for her twin sister, Lizzy, in an emotional exchange as Emily Madril knew it was her final high school match since she opted to enroll early at Florida State. Madril was part of the U.S. Under-19 National Team camp in March.

The Stanford signee made an impact while returning to the high school game. Serafin scored 41 goals and added 24 assists to help Bishop Amat to a 24-5 season. Serafin played for Bishop Amat as a freshman but sat out her sophomore and junior years to focus on club soccer. Her high school play led to her being named the San Gabriel Valley Tribune Player of the Year. She is the No. 44-ranked player in the 2017 IMG Academy 150.

The Notre Dame signee might be the nation's most prolific midfield scorer. Fisher netted 43 goals her senior season for a 21-win Grace Brethren team. She scored 94 goals over the past two seasons. She was a first-team All-CIF Southern Section Division 6 selection, a team that was headed by fellow TeamSnap First-Team All-America pick Kennedy Wesley. Fisher is the No. 71-ranked player in the 2017 IMG Academy 150.

The Duke signee was named the CIF Southern Section Division 4 Player of the Year after helping Sierra Canyon to a 22-2-2 record that included both a section and regional title -- the highest levels of postseason play in California. Mitchell had 19 goals and 13 assists. She is the No. 33-ranked player in the 2017 IMG Academy 150.

The UCLA signee was the North Coast Section Player of the Year and earned MVP honors at the National Elite Prep Showcase in Texas. Liberty went 20-1-1 and defeated Carondelet in the North Coast Section Division I final. Sheehan finished the season with 18 goals and 15 assists. During her career at Liberty, she was part of four Bay Valley Athletic League championship teams and two NCS titles. Sheehan was part of the U.S. Under-19 National Team camp in March. She is the No. 52-ranked player in the 2017 IMG Academy 150.

The Penn State commit was the Dallas Morning News Player of the Year after leading Highland Park to a 27-0 season, a Class 5A state title and the SIMA FAB 50 winter national title. Wasserman scored 31 goals and added 26 assists. She has 66 goals and 59 assists in a three-year career as Highland Park has gone 74-4-6.

The Stanford commit was named the CIF Southern Section Division 6 and Long Beach Press-Telegram Player of the Year after leading Valley Christian to section and regional titles -- the two highest levels in California soccer. Wesley, the No. 1 prospect in the 2019 IMG Academy 150, had 22 goals and nine assists. Wesley played in 14 of the U.S. Under-17's 17 matches last year and was named to the 2016 CONCACAF U-17 Women's Championship Best 11 team after helping the U.S. win the qualifying tournament.

The Auburn signee was the District 9-6A MVP after anchoring a defense that allowed only four goals during the season.

The UCLA signee was a CIF Southern Section Division 1 first-team pick after leading Westlake to a 15-1-2 season. The defender anchored a team that allowed only eight goals.

The Clemson signee(w) had a 0.17 GAA while helped Coppell to a 21-1-1 record. Coppell was in the running for the SIMA FAB 50 national title until an upset loss in the playoffs. Weber, who had 19 shutouts, was the Dallas Morning News All-Metro first-team keeper and the District 9-6A Goalkeeper of the Year.

It was quite the milestone year for Waisanen, who is in his 12th season as head coach at Oviedo. In order of memorable events, he went over 200 career wins and guided Oviedo to a second straight Class 5A state title and the program's first undefeated record. Oviedo finished the season 22-0-1. 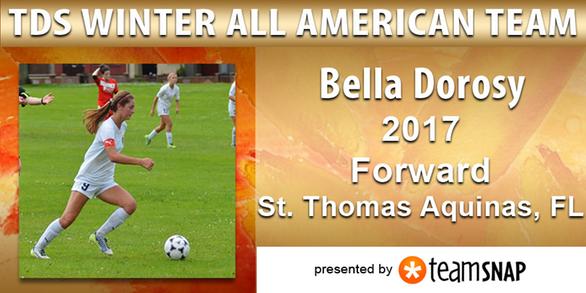