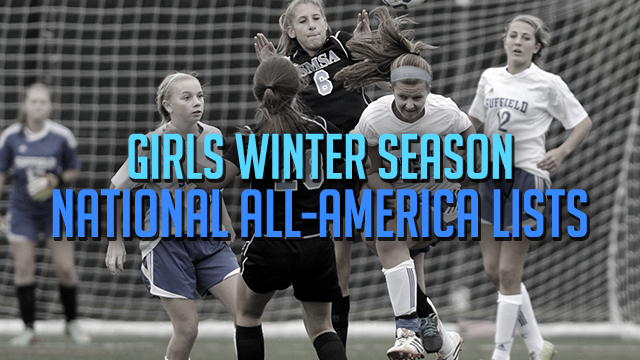 The Dallas Morning News Player of the Year put together a season to rival her youth idol Chioma Ubogagu. King finished with 33 goals and 23 assists. Her 74 career goals broke the school record set by current pro Ubogagu. King guided Coppell to a Class 6A state title, an undefeated season and a Winter No. 1 national ranking.

Monteagudo wrapped up a stellar high school career with a third straight state title. She also became only the third player in the 23-year history to be named Florida Dairy Miss Soccer in back-to-back seasons. Monteagudo had 34 goals and 21 assists during her senior season, pushing her career totals to 152 goals and 77 assists.

Thomas was the New Orleans All-Metro Player of the Year after scoring 57 goals and adding 15 assists her junior season. She has graduated early, and will report to LSU this fall. During her four-year high school career, which included a varsity season while she was in eighth grade, Thomas scored 189 goals with 39 assists.

Canales was named the All-San Diego Section Player of the Year. The junior finished with 15 goals and eight assists. She is a member of the U.S. Under-20 National Team, which recently placed second in the NTC Invitational.

Burns was selected the Times-Union All-First Coast Player of the Year after leading St. Johns Country Day to a fourth straight state title. The Duke signee finished with 31 goals and 25 assists.

The Dallas Morning News first-team selection had 28 goals and 17 assists. She was named the District 11-6A Offensive MVP. Harr is a member of the U.S. Soccer Under-20 National Team.

McDonough is a repeat Dallas Morning News First-Team All-Area selection. She led Bishop Lynch with 22 goals and 10 assists as the team knocked off Ursuline academy for the TAPPS Division I state title -- ending Ursuline's national record of 24 straight state titles.

Pederson was named the San Jose Mercury News Player of the Year after a season where the defender scored a staggering 26 goals. She's been invited to the Under-20 National Team camp. Pederson hails from a long line of successful athletes as her father played baseball for the Los Angeles Dodgers and her older brother is a top prospect in the Dodgers' minor league system.

Welch was selected as the Austin Statesman Defender of the Year after leading Vandegrift to the state final for the second straight season. She had three goals and two assists from her defensive position, and was named to the Class 5A all-tournament team.

Stricker walked away a champion -- announcing his retirement immediately after Coppell claimed the Class 6A state title. Coppell went 28-0-3 to capture the SIMA FAB 50 No. 1 Winter ranking, as well as the overall school-year No. 1 ranking. Stricker spent 17 years at Coppell, which included two state titles, eight district titles and 15 straight playoff appearances. His career record is 325-80-42.

Winter Player of the Year