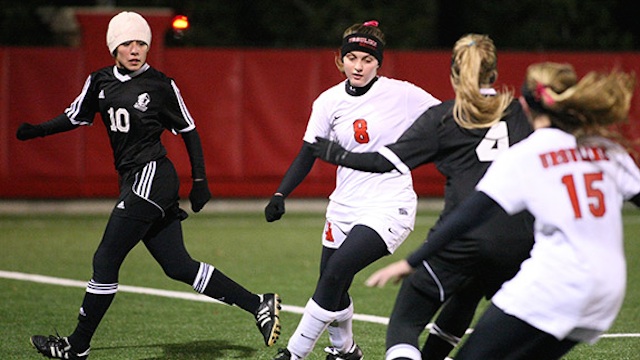 Five years ago, Darrin Hedges decided to make the Bishop Lynch girls soccer program into something more than it was. The program had enjoyed moderate success under previous leadership, but Hedges resolved to take it further. Namely, to challenge Ursuline and one of the most dominant girls soccer hegemonies in the nation.

“It had had some success in the past, but we just decided we wanted to take a step forward,” Hedges said.

Bishop Lynch’s building project under Hedges’ guidance reached its apex last week. The team, guided by the best senior class in program history, ended rival Ursuline’s incredible run of 24 consecutive TAPPS Division I state titles in girls soccer. TAPPS is the private school classification in Texas high school athletics, and no program had enjoyed quite the run Ursuline had. Further, the presence of Madison Haley, the No. 4 player in the girls class of 2017, assured Ursuline juggernaut status.

That was certainly the case during the regular season. While Bishop Lynch led 1-0 at one point in both district battles, Ursuline stormed back to win both contests 2-1. So when the two teams met in the TAPPS finale, Bishop Lynch had some mental hurdles to jump to not panic once it established a 2-0 lead.

“We just chipped away every single year,” Hedges said. “Our first year they cremated us. The second year, we were absolutely able to score a goal. They beat us 5-1, but that goal put some confidence in us. The next year, we tied them. Last year we actually beat them in the regular season, so that gave us belief.”

Bishop Lynch lost to Ursuline in penalties in the final last year, but this year’s victory wasn’t quite that close. Seton Hall signee Eva Gonzalez handed Bishop Lynch a 1-0 lead about 11 minutes before halftime, and Missouri signee Natalie McDonough’s goal with 22:32 left proved to be the ultimate match-winner. Guided by defensive stalwart Atu Mshana, Bishop Lynch kept the high-flying Ursuline attack to just one goal.

Is there a new TAPPS power rising from the ashes of one of the nation’s most formidable state title streaks in high school history? Hedges certainly won’t rule it out.

“I’m hoping that maybe some kids in the past that have known they were going to Ursuline, hopefully this will start to creep in and put BL on the map a little bit with some of those kind of kids,” Hedges said. “We’ve had great athletes here in the past, we just haven’t had as many as Ursuline’s had. Now we’re starting to get those kind of athletes to give us a look. Once we get those athletes in here to give us a look, the rest of it will take care of itself.”

One of the most anticipated high school periods happened over the weekend with CIF’s round of finals in its Southern Section. This is still a stepping stone to a bigger stage, but the dense concentration of talented soccer players made it an event worth watching across the region’s many classifications. True to form, the tournament upheld its end of the bargain.

Two of the biggest stories from the weekend involved a pair of first-time champs in the La Quinta boys and the Grace Brethren girls. Neither had ever won a CIF title, and both secured championships, La Quinta in Division 2 and Grace Brethren in Division 7. La Quinta’s win was particularly nervy, as it stormed back from two goals down in a championship game to win 3-2. Early, Santa Ana appeared to have the upper hand, but La Quinta quickly established itself and put its stamp on a comeback for the ages.

On the boys side, Servite broke through against El Toro for a 2-0 win that brought home the trophy that had eluded decorated coach Jon Spencer. Servite dominated the match and got goals from Roman Manning and Oscar Flores on a penalty to bring home the hardware. That ended two years of frustration at this stage and pushed Servite on to bigger and better things.

Finally, from the word of the surreal, Josh Peloquin of Wichita Falls Rider (Texas) checked in last week.

Texas is still marching toward postseason soccer, but it appears at least some of its players have already hit peak postseason form. Enter Peloquin, who popped up with this incredible volley at the literal last second to knock off Denton for an improbable 3-2 victory. Enjoy this one, Josh. Doesn’t get much better than that.