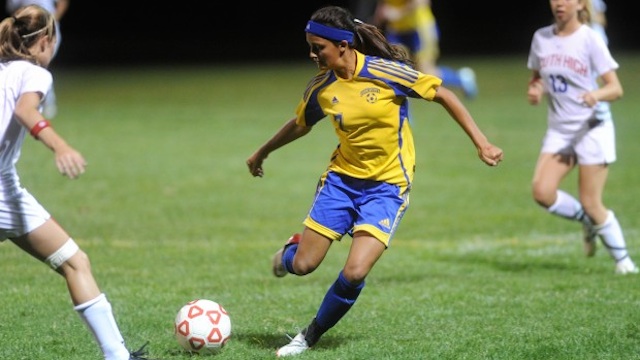 Earlier this fall, I profiled Sean Shapert, whose 213 goals are more than any high school boys player has ever scored in a career. Shapert set his record in 1984 - the record he broke was only a year old itself - and it’s hardly been challenged since. In fact, there are only four boys players in history who’ve cracked the 200 barrier.

The girls game is a different story. In 1992, four years after Shapert hit the winning goal for Indiana in the 1988 national title game, Erin Martin polished a four-year career at Temple City High School near Pasadena, California with a flourish. She didn’t just best Carin Jennings’ nine year-old record of 225 career goals. She obliterated it.

Martin finished with 286 goals for her career, and the colossus she built appears to be much tougher to approach than Shapert’s. In the 22 years since the record was erected, nobody’s gotten closer than Louisiana’s Rachel Alexander in 2004, whose 242 goals are still a whopping 44 shy of the record. In the new decade, Michigan’s Jordan Newman finished on 195 goals earlier this year, but Martin’s record was unscathed.

That could be changing soon thanks to an incendiary junior forward in New York. Meet Queensbury High School’s Brittany LaPlant. In 2013, as a sophomore, LaPlant snapped the New York single-season girls record with 73 goals in 18 games to bring her two-year career tally to 147. At that pace (about 74 goals per season), LaPlant’s current trajectory would leave her with 294 career goals, eight clear of Martin’s longstanding record.

That, though, would be a Herculean task. No boys or girls player has ever set that pace before, and LaPlant would essentially have to break the previous New York state single-season scoring record two more times en route to a place atop the heap. But she’s on her way. On Monday, the Rutgers commit scored four goals in a 9-0 rout to lift her career total to 165 goals just five games into the league slate.

She feels at least some of the pressure involved with a record chase, but it certainly hasn’t slowed her yet.

“I’m just trying to come in and play loose and get my teammates involved and create goal opportunities for myself and my teammates,” LaPlant told The Post-Star this week.

To be sure, LaPlant still has a ways to go. As of this week she’s still more than 100 goals off Martin’s mark, and Queensbury’s relative dearth of games - it only played 18 last year - could hamper her bid considering how many she still needs to score. At the very least, the state’s career record of 208 is within closer range and could fall this season with a few more outbursts. Will the national record be next? Time will tell.

A luminary steps down

Speaking of legacies, one Minnesota girls soccer coach is leaving a massive one in his wake after this season.

After more than three decades guiding Cottage Grove, Minnesota’s Park High School’s girls soccer program, Greg Juba recently announced that he’s retiring. Juba compiled a 426-163-50 record since taking the gig in 1982 and guided the team to five state tournaments and one state title. That makes him one of the winningest tenured girls high school soccer coaches in the nation.

You can read more about Juba’s story here at TwinCities.com, but suffice it to say that Park will likely struggle to fill his shoes. After taking the job initially as a soccer neophyte, he gradually developed into a respected coaching luminary in the area, and he leaves behind a legacy that will outlive him.

Anyone versed in our FAB 50 rankings knows full well the talent possessed by New Jersey’s St. Benedict’s on a yearly basis. After having their 74-game winning streak broken by Delaware power Salesianum last year, the Gray Bees charged into 2014 with renewed purpose, and their spot atop the power-packed fall top 50 rankings was more than deserved.

But that ranking came under fire a week ago when St. Benedict’s met prep No. 1 Berkshire School (Massachusetts) with mostly bragging rights at stake. But St. Benedict’s was also protecting its spot atop the rankings, and they did it in the most dramatic fashion possible.

Berkshire took a 1-0 lead on a bomb from Jack Harrison after the halftime restart, but St. Benedict’s equalized on a penalty kick from Juan Parada just 10 minutes later. The teams took that deadlock into the waning moments of the game when it took a decidedly dramatic turn. With just six seconds remaining, a mishit fell to Zachary Pereira at the edge of the box, and Pereira let fly an arrow that ripped into the back of the net. The Gray Bees were winners at the death.

That protected St. Benedict’s fresh winning streak, which started all over last year. A 5-0-0 start to 2014 is a good beginning.