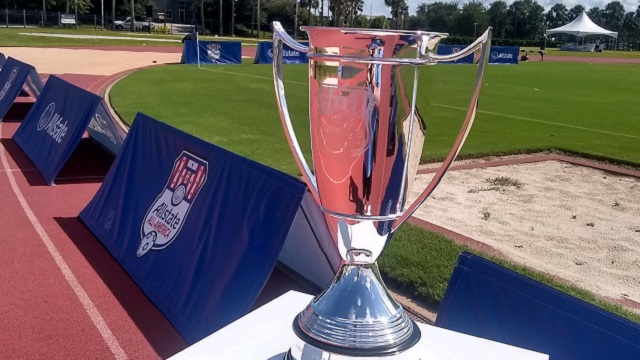 ORLANDO, Fla. -- It took one shot from a local standout to bring to an end a national all-star contest that was shown live on ESPNU.

Auburndale (Fla.) rising senior Ducarmel Jeannestin delivered a match-winning penalty kick that kissed the underside of the crossbar, bounced straight down and then had enough spin to barely cross the line to give Team Twellman a victory over Team McBride in the first Allstate All-America Cup for boys on Wednesday at UCF.

The match ended 1-1 after regulation.

"I had to keep calm," said Jeannestin, a TopDrawerSoccer Winter All-Region honoree who helped Auburndale to a Florida state title this past winter. "The whole team was counting on me."

Jeannestin's shot capped a seven-round shootout in which both keepers came up with saves on a day where the keepers stole the show. Loomis Chaffee (Conn.) keeper Jamis Fite and Northfield Mount Hermon (Mass.) keeper Khamari Culcleasure, a Princeton commit, both turned in athletic saves to keep a scoreless first half. Second half keepers Peter Van Euwen of St. Ignatius (Ohio), an Ohio State commit, and Brendan Graves of Perrysburg (Ohio), a Bowling Green commit, also put in solid performances.

"Those were great keepers," Jeannestin added. "I knew I had to place it with power."

The all-star competition featured 40 boys and 40 girls broken into 20-player teams, all of whom will be rising high school seniors this fall.

Wednesday's girls match was halted 2 minutes and 46 seconds into the contest by thunder. After a lengthy delay and no change in the weather situation, the match was moved to the indoor football facility at UCF, where the teams completed the first half. Barbara Olivieri of Tompkins (Texas) converted a penalty kick for the lone score as Team Foudy defeated Team Chastian 1-0. The teams needed to vacate the facility for a previously scheduled UCF football practice and, with the weather still touch-and-go, it was decided to bring the game to an early end.

In the boys match, Peoria Notre Dame (Ill.) forward Noah Madrigal redirected a shot by Kalani Takamura of School Without Walls (D.C.) in the 55th minute to give Team McBride a 1-0 lead. Ebube Ekpemogu of Garces Memorial (Calif.) tied the match in the 69th minute when his shot beat Van Euwan to the far post.

"My reason for being here was to score goals," said Ekpemogu, who scored 43 goals in leading Garces to a 26-2-4 season last winter. "I saw an opportunity and took it ... it means the world to me to score in a game like this."

Ekpemogu hails from the Bakersfield area that tends not to be overshadowed when it comes to recruiting by its NorCal and SoCal neighbors. Ekpemogu has a pair of NCAA Division I offers at this point, one from an instate school and the other from a program in Texas.

The following players had standout performances Wednesday in a field loaded with talent, based on observation and coaches recommendations. TopDrawerSoccer is offering only a boys Best XI as the girls game was shortened to the point it was difficult to get much assessment when a majority of the players spent less than 20 minutes on the field, and some players never got on the field.

Sammed Bawa, Taft School (Conn.) -- Bawa was a dynamic force early in the match, creating chances for himself and others.

Jose Ortiz, Sam Houston (Texas) -- Touted as the top forward at the event by the coaches, but was unfortunate not to score. Any time he touched the ball there was a chance of a goal. He is that dangerous and effective with everything he did.

Diego Anaya, Santa Ana (Calif.) -- He was very comfortable between the lines, confident on the ball and sees the game very well.

Kyle Folds, St. Ignatius (Ohio) -- Coaches were impressed by his strength and leadership. He played simple, which made him very effective.

Jony Munoz, Olathe West (Kan.) -- He was composed. He can play quickly or slowly. He has the ability to control the tempo of the game. He accurately read the pressure he was facing every time he got that ball and started making defenders miss.

Uriel Sanchez, Servite (Calif.) -- A great decision-maker who doesn't try to do too much. One coach said if he had to pick any player to give the ball to break down a defender, it would be Sanchez. Sanchez always knew whether to go to go or make the cross.

Myles Sophanavong, Peoria Notre Dame (Ill.) -- He simply glides and it never looks like he's straining. He is a very technical player. He had a shot hit the post in the second half just moments after his high school teammate, Noah Madrigal, had given the opposing teasm

Logan Longo, Briarcrest Christian (Tenn.) -- Longo was a true leader, great organizer in the back He was very confident on the ball, especially considering he is a center back. He reads the game exceptionally well. He anticipates instead of reacts.

Hassane Diakho, South Kent School (Conn.) -- One coach said he was the best player on the field. Anything he needed to break up, he did -- whether the opponent had pace or power, he read the field and covered for outside backs, and he made plays.

Jamis Fite, Loomis Chaffee and Khamari Culcleasure, Northfield Mount Hermon. It was impossible to go with just one. Fite played well and was put under a lot of pressure, but was always in position to make the stop. Culcleasure, meanwhile, had to face an offense led by athletic attacker and North Carolina commit Sammed Bawa of Taft School (Conn.) and deadly finisher Jorge Ortiz of [Sam Arlington tx-m] (Texas). Culclearsure was called on for several athletic stops during his 40 minutes of play.