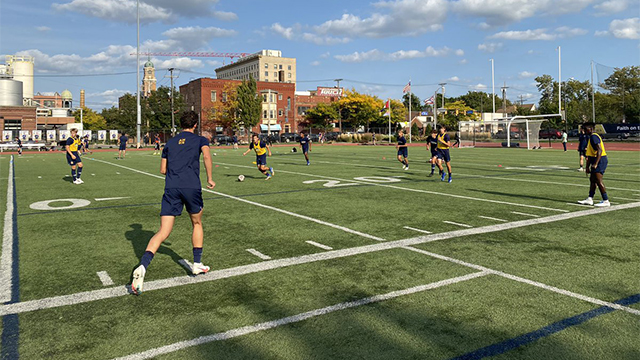 As noted last week, a staple of TopDrawerSoccer high school coverage is the weekly FAB 50 rankings.

You might notice, however, those rankings are absent — for the time being, and we have the COVID-19 pandemic to thank for that.

High school sports were in disarray this fall when the preseason rankings are generally released. Some states were planning to push their fall seasons to the spring, others delayed the 2020 start dates as late as October, and even other states moved forward as planned. Even as late as early September, when all teams usually are playing matches, there was uncertainty as who would play.

Even as late as last week, one large section in New York decided to postpone its fall season and move it to the spring.

Now, that doesn't mean there will not be a FAB 50 this fall. It simply will have a different look and feel. Instead of assigning a ranking number, teams will be grouped based on their results and talent pool. Once the season comes to an end and some reasonable assessments are possible, TDS will publish a final FAB 50. Of course, even that's subject to change if enough teams don't make it to the finish line.

For this opening look at the fall season, last year's co-No. 1 St. Ignatius (Ohio) is among the first five to begin 2020. Although this was a projected rebuilding year, it might simply be a reloading situation. The Wildcats are off to a perfect start, and with no St. Benedict's Prep (N.J.) to contend with this fall, No. 1 is there for the taking. [Note: St. Benedict's opted to play as a club team this fall and enter the EDP league after most of their games were canceled by out-of-state opponents.]

Here are our TOP 5 teams in alphabetical order (with records as of Sunday, Sept. 27):

STORY OF THE WEEK

One St. Louis-area team is taking a unique approach to the upcoming season.

They didn't cut a single player.

And, they are adding as many games to the schedule as possible.

That idea was the brainchild of longtime Chaminade (Mo.) coach Mike Gauvain. He told TopDrawerSoccer recently that kids already have faced enough hardship the past six months, he didn't want to add to that by cutting players to get down to 18 field players. He has worked with the school's athletic director and currently has 18 matches slated for the 30-day regular season, which starts Sept. 29 and runs through Oct. 29 for Chaminade. Gauvain said Chaminade will play different lineups in every contest in order to get playing time for all 30 field players and a few keepers they kept on the roster this fall.

LET'S GET STARTED: New Jersey might not get a chance to settle No. 1 on the field this year due to reduced schedules and limited playoffs, but one thing is for certain -- the state is loaded. Seton Hall Prep (N.J.) returns a trio of players who were part of the TopDrawerSoccer New Jersey State Stars list last season. Clifton (N.J.), with a top keeper and plenty of firepower returning, is the projected top public school program following last year's undefeated season. Delbarton School (N.J.), with seven returning starters, is always in the national rankings and could be poised for a run at state and FAB No. 1 in 2020.

TAKE NOTICE: Barrett Olash had a goal and assisted Patrick Holdener's score as DuPont Manual (Ky.) surprised St. Xavier (Ky.) 2-0 in a clash of undefeated squads over the weekend. The win elevates DuPont Manual into Top 5 consideration for the time being. This is shaping up as a strong fall season for Kentucky, which has three Top 25 teams and two others under consideration.

PLAYING CATCH-UP: Missouri high school soccer long has been dominated by the St. Louis private school powers. Until recently, it was looking like no St. Louis private school would be vying for a large school state title this year. Several areas in Kansas City, throughout Missouri, and in parts of the St. Louis metro area have moved forward with matches, some teams already well into double-digit matches played. The St. Louis Metro Catholic schools were just given the green light to start, and those schools, which includes preseason Top 25-ranked and defending state champion [DeSmet Jesuit mo-m] (Mo.), get started this week.

GETTING HER KICKS: Chesterton (Ind.) senior and Valparaiso commit Addy Joiner set the school scoring record with a hat trick on Sept 12, pushing her total to 94 goals. In the matches since, she's added 11 more goals for 105 -- and counting.