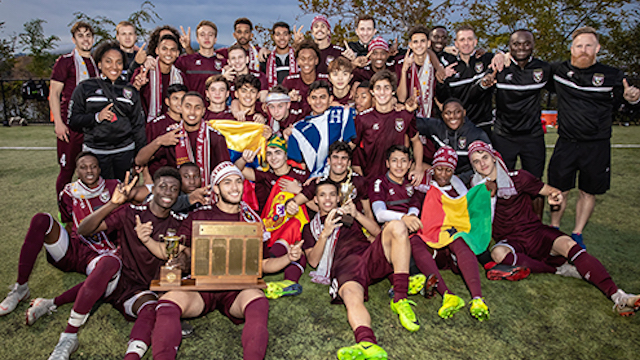 For St. Benedict's, it earns this private school powerhouse a sixth FAB 50 title in the past eight years and a 12th national title overall.

For record-setting Naperville North, it earns the label of the best public school program in the country.

Both are high honors for such deserving programs.

The preseason order was set based on an understanding of the returning players and the knowledge both programs had put together highly competitive regional/national schedules. Somewhere along the way, you would figure one of them might get tripped up playing against blockbuster competition. Instead, both delivered perfection.

St. Benedict's has pinned the only losses so far on Top 25-ranked St. Ignatius (Cleveland, Ohio) and Walt Whitman (Md.). In addition, St. Benedict's defeated another Top 25-ranked team in Salesianum (Wilmington, Del.), whose only other defeat was to Milwaukee Marquette (Milwaukee, Wis.) in penalty kicks at the Go 4 The Goal Fall Classic. The G4TG event was won by Naperville North in penalty kicks over Milwaukee Marquette. St. Benedict's handled Salesianum 3-0. So, for those who really pay attention to the high school scene, the nation's top programs have plenty of point-of-reference contests.

If only there was a Champions League for high school teams ... hmmm. Gives me an idea for 2019.

Anyway, while the top of the boys rankings is settled, the rest of the list is an ongoing piece of work.

The results last weekend led to some teams being shuffled in the Top 10. A couple of multi-loss teams took a slight step back to stay true to their out-of-state results, as undefeated teams from New Jersey and New York moved up with a chance to retain those spots with state titles. For the teams that are finished, the current ranking likely will not be their final ranking. Two weeks of high school play remain and a number of FAB 50 head-to-head clashes have yet to occur.

On the girls side, McDonogh School (Owings Mills, Md.) has claimed its spot among the Top 3 for now. The current No. 1 and 2 teams will finish postseason play this week, along with the current Nos. 4, 5 and 6 squads. Therefore, it is likely the girls Top 5 will be sorted out by Sunday.

BIG MOVERS: BOYS: Christian Brothers College (St. Louis, Mo.). One of the nation's storied high school programs is back in the Top 25 following a pair of postseason wins last week. CBC is four wins away from a second straight state title, and made a seven-spot jump from No. 32 to No. 25. ... GIRLS: Twinsburg (Ohio). Twinsburg's win over last week's FAB 50 No. 3 team allowed this Ohio squad to jump to No. 6 this week. The move puts Twinsburg in line for a high FAB 50 finish, especially if it delivers a state title. The four Ohio Division 1 semifinalists are a combined 79-1-5 this season, and three of those teams hold down the No. 4, 5 and 6 rankings this week.