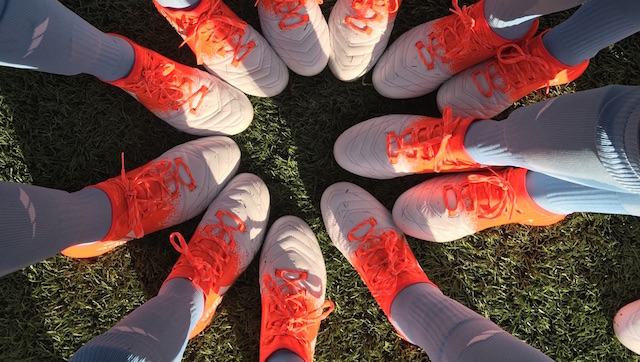 Pretty much any way a ball propelled from an attacking player could end up in the net, it happened Saturday in the most dazzling offensive display in High School All-America Games history. By the time afternoon had turned into evening at Cardinal Gibbons High School, 14 players combined to score 17 goals in a pair of highly entertaining matches that featured many of the nation’s top fall-playing high school seniors.

Stuart Aeschliman of West Salem (Ore.) scored twice in the final 17 minutes as the West rallied for a 4-4 tie with the East in a boys match that featured three goals in less than 90 seconds at one point in the second half.

Later in the day, Gabrielle Brummett of Derryfield School (N.H.) scored twice in the first half, staking the East to a 3-0 lead that turned into a 5-4 nail biting win for the East.

The matches will be archived and available to view on TopDrawerSoccer in upcoming days.

Aeschliman, uncommitted, and North Dame(m) commit Aiden McFadden of West Chester Henderson (Pa.), who also scored twice, were named MVPs for the boys match. Duke commits Karlie Paschall of Ravenwood (Tenn.) and Caitlin Cosme of Herricks (N.Y.) were the girls MVPs. Paschall had a goal and one assist.

A unique feature to the High School All-American Games, when a goal is scored, the ball is removed from play and later awarded to the scorer. Goalkeepers who post a shutout half, also get a game ball. At the final whistle of the girls match, the nightcap, nearly all of the 24 balls were taken out of play.

The matches were so wide open that it prompted event organizer Eric Stratman to turn to the crowd late in the girls match and say, “If we run out of balls, the game is over,” a comment that was greeted by laughter from the couple hundred in attendance.

Bucknell commit Matt Thorsheim of Christian Brothers Academy (N.J.) got things going with free kick goal late in the first half to give the East boys a 1-0 lead. Gianni Catenacci of Rockhurst Jesuit (Mo.) and Adam Snow of Cooper (Ky.) scored to put the West ahead 2-1 in the second half. The between the 76th and 78th minutes, McFadden scored on both sides of a goal by Michigan commit Umar Farouk Osman, putting the East ahead 4-2. At that point, it appeared the rout was on before Aeschliman’s late heroics.

In the girls match, Rutgers commit Amirah Ali of Eastern (N.J.) opened the scoring and then Brummett scored twice as the East carried a seemingly comfortable 3-0 lead into the break. In the second half, UC Davis commit Lauren Bouvia of Weiser (Idaho) and Paschall scored for the West, closing the gap to 3-2. Notre Dame commit Eva Hurm of Northern Highlands (N.J.), who assisted the first goal of the match, scored one of her own to restore a two-goal lead for the East at 4-2. USC commit Arlie Jones of Bishop Gorman (Nev.) scored the most improbable goal of the night, going far post, upper 90 from tough angle to again pull the West within one at 4-3. Illinois commit Hope Breslin of Massapequa (N.Y.) scored to push the East lead to 5-3. In the closing minutes, Washington State commit Marin Auth of Medina (Ohio) scored on a diving header for the West to close out the scorefest.

Over the next three days, TopDrawerSoccer will offer more complete post-match coverage, including:

Together Again — Two girls who started their high school careers on the same team, then ended up at different schools were reunited one last time in the All-America Game