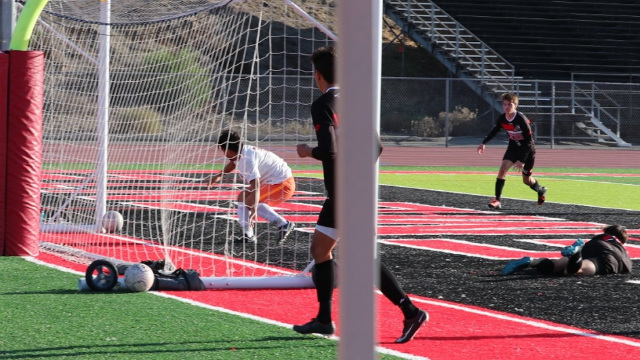 That seemed to be the theme Thursday at the 4th Annual Lotto Sport Western Showcase.

In the night's showcase match, FAB 50 No. 10 Paramount (Calif.) keeper Oscar Sierra made a game-winning save in the shootout as the reigning California regional champs defeated four-time defending Louisiana state champ and FAB 50 No. 8 St. Paul's (La.) in a shootout following a scoreless match. Defending Lotto Showcase champ Corona del Sol (Ariz.) lost to host San Clemente 1-0 when the Arizona team saw a potential late game-tying chance somehow never make it into the net despite rolling along the goal line. In the other matches, FAB 50 No. 5 Servite (Calif.) defeated FAB 50 No. 39 Watsonville (Calif.) 2-0 and FAB 50 No. 25 Auburndale (Fla.) topped Buchanan (Calif.) 3-0.

San Clemente (Calif.) 1, Corona del Sol (Ariz.) 0: Evan Dillbeck scored three minutes into the match and it held up in a highly entertaining opener. Corona del Sol was the defending champion of the Lotto Sport Western Showcase, but watched as several chances went high and one ball simply wouldn't go into goal after bouncing around the goal line.

Andrew Burror served up a cross that Dillbeck, playing on the wing, anticipated and moved in to settle the pass. He took one touch that got him alone on the keeper and easily finished.

Dillbeck later cleared a ball off the goal line in a match where it seemed more than one goal likely would be scored, but never happened.

Paramount (Calif.) 1, St. Paul's (La.) 0: Oscar Sierra made a pair of saves on the last two penalty kicks he faced as Paramount won this showdown of nationally ranked opponents in a shootout. St. Paul's keeper Kyle Schmitt made a save that set up St. Paul's for a potential game-winning PK in the fifth round, but Sierra rose to the occasion, turning away a shot to his right to force a sixth round. Paramount's Alexis Galindo converted for the Pirates before Sierra's second save won the match with a save. The first four players for both teams converted their attempts.

Servite (Calif.) 2, Watsonville (Calif.) 0: Corbin Mercado and Kyle Pearce scored the goals in the second half as Servite won a game that never seemed in question. Mercado served up a direct kick that found the net, and less than five minutes later Pearce headed home a cross from Cade Fuller. Pearce's goal came on his 17th birthday.

F James Bryant,  St. Paul's (La.), Sr.: Bryant made a lot of quality runs on the right wing to test the Paramount defense.

F Oliver Meza, Paramount (Calif.), Sr.: Meza created created several chances for himself and teammates. He was probably the most dynamic player on the field in that match.

F Kyle Pearce, Servite (Calif.), Jr.: A well-placed header for the team's second goal was the crowning moment on a solid performance by Pearce, who was celebrating his 17th birthday.

F Austin Roberts, Buchanan (Calif.), Sr.: A defender who has been moved to forward was very creative and important in Buchanan's attack.

M Isaiah Cummins, Buchanan (Calif.), Sr.: Cummins held his own in the middle against a talented Auburndale lineup.

M Rafael Yepez, Paramount (Calif.), Sr.: Yepez is the team's quiet leader. He won a lot of balls in the midfield and made nifty passes to spring his teammates for chances.

M Noah Sims, Auburndale (Fla.), Jr.: One of the more dynamic players on the field Friday, his efforts was rewarded with a stunning goal from distance in the final minute to cap a 3-0 win. Sims was all over the field, making plays.

M Marc Trejo, Servite (Calif.), Sr.: Spent time at both attacking and defensive midfielder and put in a lot of good work for the Friars.

M Uriel Sanchez, Servite (Calif.), So.: Sanchez plays on the left side and simply flies all over the field. His speed and cleverness on the ball proved a handful for Watsonville, especially in the first half.

D Blake Cutlip, Corona del Sol (Ariz.), Jr.: Turned in a dependable performance. He seemed up to the challenge every time he was called on. Cutlip also showed a high work rate.

D Corbin Mercado, Servite (Calif.), Sr.: Servite posted its first shutout of the season, and it was largely due to Mercado, who simply gobbled up opponents. The Loyola Marymount commit also got into the the attack, serving up a direct kick that led to the team's first goal.

D Fernando Ornelas, Paramount (Calif.), Sr.: The center back pretty much thwarted a dozen St, Paul's attacks by himself. A very effective back in shutting down opponents by showing good speed and the ability to anticipate the play.

GK Oscar Sierra, Paramount (Calif.), Sr.: The tall, lanky Sierra with very quick and athletic. He was at his best in what ended up as a six-player shootout where he got a hand on two shots and saved two others as Paramount advanced with a win.