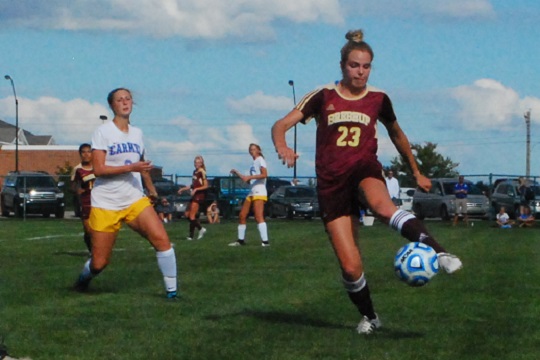 ZIONSVILLE, Ind. – After 25 years as the girls soccer coach at Carmel (Ind.), Frank Dixon has pretty much seen it all. However, Friday’s first-round play at the Lady Eagle Invitational left the dean of local coaches shaking his head.

Every outcome in the five varsity contests was a surprise, starting with SIMA FAB 50 No. 19 Carmel’s 4-0 dismantling of two-time defending state champion and No. 16-ranked Brebeuf Jesuit (Ind.) in a battle of undefeated teams.

“Remember when Strongsville (Ohio) came here and gave up four goals a few years ago, and Fishers (Ind.) got beat bad last year?” Dixon asked, referencing past Lady Eagle Invitational surprises. “Every year I come here and hope that doesn’t happen to us. You never know what’s going to happen.”

Katherine Soderstrom removed the drama from the Carmel-Brebeuf match less than a minute into the contest.

“We wanted to start with high pressure and catch them off guard,” the junior Butler commit said. “We won the ball on the counter, and I had the ball at my feet and I thought, ‘Hey, I can go to goal.’”

And with that, only 45 seconds into the match, Soderstrom gave Carmel a 1-0 lead.

“Scoring early really set the tempo,” Soderstrom added. “It picked up our intensity and I think it deflated them.”

Soderstrom added a second goal in the second half, Emily Roberts had a goal and two assists and Ali James had three assists as Carmel, using its raw speed and well-organized attack, improved to 6-0-1.

MF Cassie Amshoff, Sacred Heart Academy, Jr. –  MVP of the day, scoring four goals in Sacred Heart’s victory. Amshoff’s first goal was a shot from distance while playing in the midfield. She spent the match effectively moving back and forth between forward and midfield and always staying dangerous.

F Jessi Cowen, Carmel (Ind.), Sr. – Although she was not a direct factor in Carmel’s goals and assists, Cowen’s pressure on Brebeuf’s defenders led to a number of turnovers that Cowen’s teammates were able to cash in for goals.

MF Madeline Grabowski, Brunswick, Fr. – Despite being only a freshman, Grabowski provided a physical presence and produced the team’s second goal in a draw with highly ranked Penn.

D Mariah Kimble, Brunswick, So. – Kimble drew the assignment of man-marking Florida State-bound Kristina Lynch and did a credible job slowing down one of the most dangerous attacking players in the the Midwest.

MF Kristina Lynch, Penn (Ind.), Sr. – Lynch scored the first goal of the match, then served up a long-ball assist to help Penn rally for a draw with Brunswick. In between, she provided several other highlights, showing why Florida State was an early suitor.

F Katherine Soderstrom, Carmel (Ind.), Jr. – The speedster constantly blew past defenders, creating all sorts of chances for Carmel. She ended with a pair of goals.

All 19 varsity teams at the Lady Eagle Inviational will be in action Saturday, highlighted by the following contests: