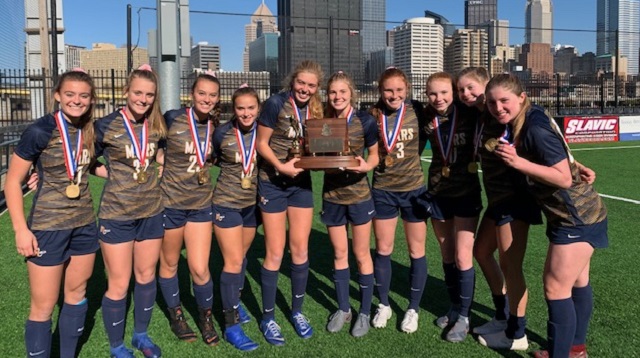 It has become cliche for teams that win titles to attribute some amount of its success to "becoming a family."

Well, there's one team in Pennsylvania that can back it up.

"[With so many siblings] we were already close when we started training, and we became closer during the season," said Middle Tennessee commit Taylor Hamlett, who got behind the Villa Joseph defense in the first half to score the lone goal of the match. "That's the most important goal I've ever scored. I'll remember that goal for a long time," she said, while become visibly emotional. "It means everything to accomplish something like this [state title], but to do it with friends, family, makes it so much better."

Mars ends the season at 22-0-1 and climbs to No. 3 in the Mid-Atlantic regional rankings.

This past weekend, play wrapped up in many fall states and North Penn (Pa.) boys, Hunterdon Central (N.J.) girls, Portland Jesuit (Ore.) and Faith Lutheran (Nev.) all secured regional No. 1 rankings for the 2019 season.

See the latest list of state and regionally ranked teams, which features more than 300 of the nation's top fall-playing teams.