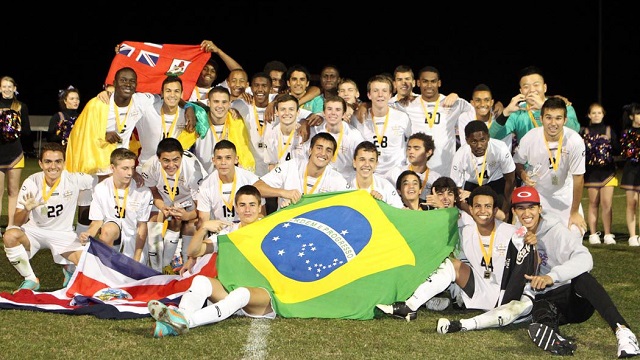 Paramount’s 2-0 win over The Woodlands (Texas) made the perennial CIF Southern Section title contender the first California team to reach the MAST final.

Meanwhile, Montverde Academy – the only champion the event has ever known – is back in the final for the sixth straight year following a not-as-close-as-it-looks 3-2 win over St. Paul's (La.).

Pembroke Pines and Watsonville meet for seventh place, followed by Gulliver vs. Tampa Jesuit for fifth place, and St. Paul’s against The Woodlands for third place, leading to the final.

Three of the four matches Friday were played in a steady drizzle, which lasted the entire contest between Montverde and St. Paul's.

Paramount scored twice in the first 20 minutes and held that lead the rest of the way as The Woodlands was shut out for the second straight match.

Montverde Academy went up 3-0 only 15 minutes into the match and threw it into cruise control. The team used an entirely new 11 to begin the second half, and subbed out almost all over those players, as well, getting more than 30 players into the contest. St. Paul’s Ross Thieler scored a minute into the second half, then Colin Moser netted a goal with 11 seconds left for the final margin.

MF Joseph Amoako, Montverde Academy (Fla.), Fr.: Amoako, who played in the midfield, was a second-half sub but caught the attention of the college scouts in attendance. He plyed with pace and confidence that is rare in a freshman.

F Kizza Edward, Montverde Academy (Fla.), Sr.: One of the most coveted uncommitted high school seniors, Edward’s quality was evident early. He scored the team’s second goal on a blast from the left side of the goal. He then created the third goal with a shot that was deflected into the net by a St. Paul’s defender. Edward plays with his back to goal a lot, but when he turns, he’s incredibly dangerous.

D Michael Longo, St. Paul's (La.), Sr.: Longo is a gamer. Even as he cramped up late in the match, he stayed in the game and helped shut down Montverde’s second and third groups. He also has a big leg and served up some lengthy restarts.

D Philip Pearce, St. Paul's (La.), Soph.: For the second straight match, Pearce turned in a quality performance as an outside back.

MF Nicholas Pekel, The Woodlands (Texas), Sr.: The Montevallo commit makes a second straight appearance on the Top Performers list. He is a controlling force in the midfield.

MF Royce Pope, Tampa Jesuit (Fla.), Sr.: Pope, one of the MAST standouts a year ago, delivered a game-winning goal in the final 90 seconds as Tampa Jesuit edged Pembroke Pines Charter in a consolation match.

F Christian Perez, Paramount (Calif.), Sr.: Although Perez did not score, he was a constant threat every time the ball was on his feet.

D Jesus Salazar, Paramount (Calif.), Sr.: Salazar got a head on restart early in the match to give Paramount its first goal in a victory over The Woodlands. But it was his defense that earns him a spot on the top performers list, anchoring a defense that shut out The Woodlands.

MF Adam Schellang, St. Paul's (La.), Sr.: Schellang showed a lot of energy in the second half, and made a couple strong tackles to break up Montverde’s attack.

MF Jonathan Serrano, Paramount (Calif.), Jr.: Serrano was a workhorse in the midfield and sent a lot of balls forward that put The Woodlands under pressure.