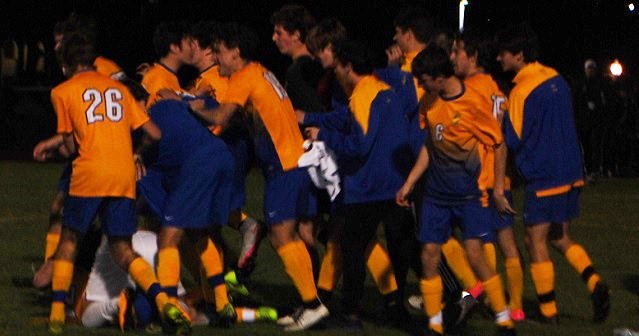 MONTVERDE, Fla. – Eighty minutes simply were not enough for the top four teams at the Montverde Academy Soccer Tournament.

Saturday night’s final pits the teams with the longest two active undefeated streaks in the nation – Montverde Academy at all-time national best 135 in a row, St. Paul’s at 62. Cathedral and Melbourne will play for third place.

All four matches during Friday’s play came down to the wire. In addition to the two shootout matches, Sam Houston (Texas) defeated Gulliver Prep (Fla.) 1-0 on a goal with 55 seconds left, and Tampa Jesuit (Fla.) edged Chandler (Ariz.) 2-1 on a goal with two minutes remaining.

The Montverde-Cathedral match was scoreless; and St. Paul’s-Melbourne played to a 1-1 contest before the penalty kick finishes in what is turning out as a defense-dominated event. Take away Montverde’s 5-0 first-round match and there have been a total of nine goals in seven matches.

While most teams pack it in and play for a counter against Montverde, Cathedral played its usual pressing style of soccer on Friday, and it nearly worked.

In between dodging a number of Montverde chances, Cathedral created a fair number of legitimate chances itself, but after 80 minutes the match remained scoreless.

In the shootout, Montverde Academy keeper Chase Vosvick made a save on Cathedral’s opening attempt and Caua Soares converted his shot, putting the Eagles in command. Another Vosvick save in the third round and a Cathedral shot off the post to end it, put Montverde in the MAST final for the fifth straight year.

“I was confident and I have trust in my teammates,” said Vosvick, who formerly played for Baltimore Bays in the Development Academy. “They did their thing, and I did mine.”

“[Cathedral] pressured us, they defended and they hung on,” he said. “We’ve had some close games (over the years), but that’s usually because we didn’t capitalize. This, this was a good game.”

“It was a battle,” Cathedral coach Art Lopez said. “Our guys never back down. This season, this was our best game … respect to [Montverde], but respect to us, as well.”

For the second day in a row, a sophomore goalkeeper from Louisiana has been the center of attention.

Kyle Schmitt, who made two saves in a shootout win Thursday, came up with only one Friday in a shootout, but it was enough to carry St. Paul’s to a victory over Melbourne in the MAST semifinals.

After St. Paul’s and Melbourne each converted their first eight penalty kicks, Schmitt came up with a diving save to his left. Mason Robicheaux then tucked a shot into the upper left corner for the 9-8 shootout victory following a 1-1 match.

“After giving up [eight in a row], it starts messing with your mind,” Schmitt said. “I just needed to keep my head in the game. Good thing our guys kept making kicks. … It worked out, and here we go to the final.”

St. Paul’s coach Sean Moser didn’t think beyond five players for penalty kicks. Therefore, when it reach the sudden death round, “I had no idea who would be 6-10, so I asked our captain Colin Ross to pick the next five, and he puts my son (Colin Moser) at No. 6.” The plan did work as all nine St. Paul’s players converted their attempts.

“It was great to have a game like that,” Montverde keeper Chase Vosvick said of the shootout win over Cathedral, which was followed by a dogpile near the top of the 18 and the players lifting Vosvick in the air following his two-save effort. “Usually we win pretty easily. Something like this bring back some passion for the game. Games like these remind us why we love this game.”

D Esteban Calvo, Sr., and Justin Malou, Jr., Montverde Academy (Fla.): The central defenders find themselves largely inactive in many matches, but Friday they showed the ability to cut off most Cathedral attacks. As the coach put it, “they both made the right decision about 95 percent of the time.”

M Bruno Lapa, Montverde Academy (Fla.), Sr.: Lapa was a calmness about his game, and is able to control a game from midfield.

D Michael Longo, St. Paul's (La.), Jr.: A true warrior and very strong defender. After getting bloodied in a collision early in the match, he returned to the field with his head bandaged and dried blood on his face. He cleared two sure Melbourne goals off the line.

GK Gabriel Mellor, Gulliver Prep (Fla.), Jr.: Without Mellor, Gulliver might have been down 3-0 or 4-0 in the first half. He’s an active keeper who came up with several diving saves. He was real strong to his right.

F Royce Pope, Tampa Jesuit (Fla.), Jr.: Two matches in a row, Pope has been the best player on the field for Jesuit. Friday, he was rewarded by scoring both goals.

D Eddy Rodriguez, Sam Houston (Texas), Sr.: The center back in Sam Houston’s 3-5-2 lineup holds a lot of responsibility. He takes free kicks and long throws. He was constantly involved in the action. He set up the winning score with a nifty free kick. Instead of taking what would have been a reasonable attempt on goal, he found Alex Fuentes wide open to the left of the wall, got the ball to him for the game-winning score.

D Edwin Vasquez, Cathedral (Calif.), Sr.: One of the few seniors in Cathedral’s lineup, Vasquez was instrumental in helping keep Montverde off the scoreboard. He was physical, and made his presence known. As soon as Montverde’s Biska Biyombo entered the contest, Vasquez made sure to foul him to let the big man know he as in for a battle.