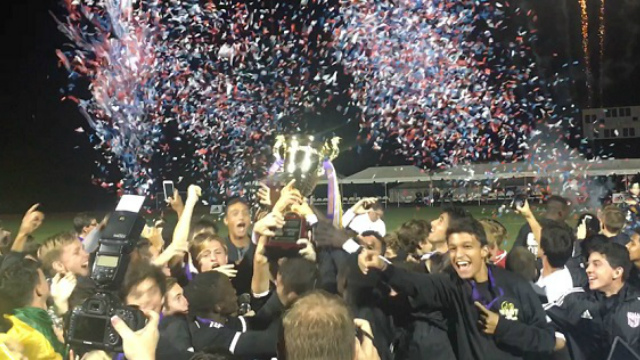 MONTVERDE, Fla. – Names and faces change but one thing remains constant at the end of the Montverde Academy Soccer Tournament – Montverde Academy players hoisting the trophy as confetti rains down and fireworks explode overhead.

“This is great,” said Montverde Academy senior and tournament MVP Esteban Calvo, a defender who was draped in the flag of his native Costa Rica. “Another undefeated season – it cannot be better than this.”

“I’m happy for the kids … That’s what it’s all about,” Montverde Academy coach Mike Potempa said. “This memory will last them the rest of their lives. They will go on to other lands, other places, but they’ll always remember this.”

Montverde has won all five MAST titles, but this marked the largest margin of victory.

The Eagles went through the 2015-16 season allowing only three goals in 19 matches, which will secure a fourth straight SIMA FAB 50 national title and fifth in the past six years. In addition to the team’s record undefeated run, Montverde also has won 53 straight contests.

Montverde carried a 1-0 lead into halftime, but scored twice early in the second half to put the match out of reach.

“I thought their finishing was phenomenal,” St. Paul’s coach Sean Moser said of Montverde. “We played decently well in the first half. The first 10 minutes of the second half killed us.”

After a St. Paul’s player played an errant free kick straight to Novaes, the Montverde senior served a long ball to Edward who beat the defense and then the keeper to make it 2-0 early in the second half. Just minutes later, Novaes scored a goal of his own for an insurmountable 3-0 lead.

Cathedral (Calif.) 1, Melbourne (Fla) 0 (OT): With his back to goal, Elijah Rojas flicked a free kick from Luis Cazares into the upper right corner in golden goal overtime to lift Cathedral to a second straight third-place finish at MAST. The Phantoms shut out all three MAST opponents, losing only to Montverde in a shootout following a scoreless match.

Tampa Jesuit (Fla.) 3, Sam Houston (Texas) 2: Connar Lufkin converted a penalty kick and 1:26 later Jake Collins scored as Jesuit rallied for a victory over Sam Houston. Harrison Astroquiza gave Jesuit a 1-0 lead before Alex Fuentes scored twice, his second and third goals of the tournament, to give the Texas side a lead. The last three goals were scored in the final 15 minutes.

* St. Paul’s, which was averaging more than 3 goals per match before MAST, scored only one goal in three contests against Florida opponents.

* Montverde Academy has allowed only six goals over its last two seasons – a run of 40 matches.

* California teams have finished third in the last three MAST events, starting with San Clemente (Calif.) in 2014 and Cathedral the past two years.

* Alex Fuentes and Leonardo Novaes each scored three goals to tie for the Golden Boot, the second time there has been a tie for that honor.

* Gulliver Prep, which scored the most goals in the 2015 event after rolling a pair of consolation opponents, failed to score a goal in three matches at the 2016 MAST. The offensive struggles were not a surprise given Gulliver’s top two scorers sustained season-ending injuries just before MAST, according to the team’s coach.