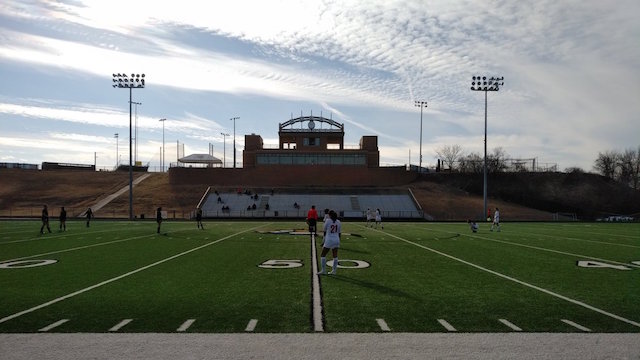 Three events with national ranking consequences started Thursday, the first day of regular-season play for the Texas UIL programs, and by in large the highly ranked teams held their own -- al beit in a nail bitter for two boys powers.

TopDrawerSoccer will compiled a daily recap for these three events.

Co-hosted between Marcus (Texas) and Coppell (Texas), the North Texas Elite Showcase has been elevated to national status this year as out-of-state powers Brophy Prep (Ariz.) and San Clemente (Calif.) join a strong field of Texas schools, which includes last year's 6A state runner-up and state semifinalist. Seven of the eight teams in this year's event are ranked in the FAB 50.

FAB 50 No. 1 Sam Houston (Texas) and No. 3 Brophy Prep were pushed to a shootout following regulation ties, but both emerged victorious to move to Friday's semifinals and keep alive a chance at a Saturday title meeting.

Sam Houston won a wild match over San Clemente, which was tied at 4 after regulation and went to extra kickers before Sam Houston eeked out a 5-4 victory. Sam Houston led 2-1 at halftime on goals by Jose Ortiz and Kevin Tankou. San Clemente scored twice early in the second half to snag a 3-2 lead. Angel Varela tied it at 3 for Sam Houston before San Clemente surged ahead again 4-3. In the closing minutes, Ortiz ripped a free kick from 30 yards out to tie the match. In the shootout, Tankou converted the winning penalty and keeper Izac Garcia made two saves for the victory.

Day 1 also saw the Marcus debut for coach Chad Rakestraw, who had previously led Coppell into the national scene. Rakestraw's Marcus squad emerged with a victory to move into a clash with Sam Houston on Friday.

The original national high school showcase for girls winter soccer is celebrating its 16th year with a loaded field. In fact, five of the FAB 50 Top 25 teams are competing in this year's event, which has representatives from California and Florida.

There weren't much in the way of surprise winners, but there were certainly surprise results. Taylor Moon, who has been a star at past NEPS events, had a goal and two assists as FAB 50 No. 5 Marcus (Texas) routed No. 10 Ursuline Academy (Texas) 5-1. The other major surprise was No. 44 Carondelet (Calif.) completely running over No. 6 Keller (Texas) 7-1, in what was Keller's second match in less than six hours.

TAMPA BAY INVITATIONAL
In Tampa, Fla., Eric Sims has revived the one-time national event, now labeled the Tampa Bay Invitational. Tampa Jesuit originally hosted, then co-hosted, an event from the 1990s to the early 2010s that featured up to 32 teams with squads traveling in from California, Louisiana and Texas. It was the original national showcase during the high school winter season. The event withered away when the former coaches of those schools retired. Sims, now the coach at Tampa Jesuit, has brought back an eight-team event with hopes for a larger tournament next year. This year's tournament has six teams from various parts of Florida, along with a perennial Texas private school power and a program from Puerto Rico.
The marquee match pitted FAB 50 No. 48 Melbourne (Fla.) against [Seminole (Seminole) fl-m] (Fla.). But this was Seminole of Seminole, Fla.; not the regionally ranked Seminole of Sanford, Fla. Carson Prestipino scored three goals as Seminole stunned Melbourne.
DAY 1 RESULTS
J.W. Mitchell Fla.) 3, Belen Jesuit (Fla.) 2; Strake Jesuit (Texas) 5, Osceola (Fla.) 0; [Seminole (Seminole) fl-m] (Fla.) 4, Melbourne (Fla.) 2; Tampa Jesuit (Fla.), San Ignacio (Puerto Rico) 0.
DAY 2 MATCHES
Consolation: Belen Jesuit vs. Osceola; Melbourne vs. San Ignacio
Semifinals: J.W. Mitchell vs. Strake Jesuit; Seminole vs. Tampa Jesuit.