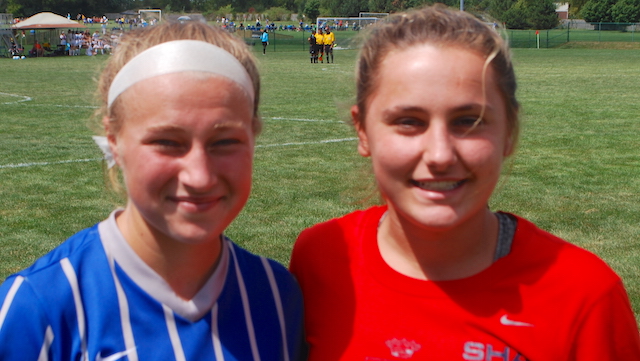 In varsity matches at the Lady Eagle Invitational, Ohio teams posted a collective winning record in games against out-of-state opponents to finish just ahead of Kentucky and Indiana in the most competitively balanced event to date.

“For us, this tournament is a win-win,” Sacred Heart coach Jaclyn Puntillo. “We’re from Kentucky and no one expects us to win. We recognize we’ve got to increase our game [at Zionsville] because the competition is fierce. If we don’t win, this helps make us better. If we do win, it shows our girls we can compete regionally.”

Thanks to the foot and head of Louisville commit Cassie Amshoff and steady goalkeeping from Sarah Stodghill, Sacred Heart weathered a second-half barrage from Carmel to leave Zionsville with the group trophy and much earned respect.

Amshoff scored all five of Sacred Heart’s goals in the two-day event, and the final one, on a corner kick served by Sarah Buse, was enough to lift Sacred Heart to a 1-0 victory in the showcase game of the day played on the ZYSA Championship Field before a couple hundred spectators.

“As a program, these are some of the best teams we will see, and [winning in Zionsville] really builds confidence,” said Amshoff, whose weekend scoring took on many different forms. She scored three goals with her left foot, one with her right and one on a header. Her scores were from distance, on a corner kick, a follow-up and she even converted a goal from a difficult angle. When asked if scoring ever got old now that she has 11 goals in the team’s 6-0-1 start, she smiled and quipped, “No.”

“Our habit of giving up an early goal finally bit us in this game,” Carmel coach Frank Dixon said. “After two good early chances, we gave Sacred Heart a corner kick, which resulted in a goal, and then we chased the game without ever getting an equalizer.”

TAKE NOTICE: The Zionsville Lady Eagle Invitational is loaded with regionally and nationally recognized programs, but the event always seems to open doors for a few surprising programs. The teams making the most of the opportunity this week were Sylvania Northview, Notre Dame Academy of Toledo, Ohio, and Simon Kenton.

Northview’s 2-1 win over Noblesville (Ind.) on Friday and 4-0 victory over Harrison (Ind.) Saturday were the team’s first wins of the year, and helps the national ranking case for Walsh Jesuit and Perrysburg, a pair of undefeated teams that beat Northview this season.

Notre Dame Academy has yet to concede a goal in its 3-0-1 start, which includes a scoreless tie with Northview. In Zionsville, Notre Dame Academy stunned Zionsville 1-0 on a goal by sophomore Ashley Barron on Friday night, then followed that with a 2-0 victory over Assumption (Ky.) on Saturday with goals from Barron and freshman Rachel Spencer. Notre Dame Acaemy has nine returning starters from last year’s team and the roster still features 19 underclassmen.

Simon Kenton made the five-hour round-trip to play one varsity match and came away with a 3-1 victory over Avon (Ind.). Xavier commit Abigail Zoeller scored the first goal and assisted on a goal, and sophomore Haley Dougherty scored twice for Simon Kenton. With only two seniors on the roster, state-ranked Simon Kenton is growing into the role of state contender not only this year but also for the future.

QUIETLY SUCCESSFUL: [SIMA FAB 50 No. 4 Penn and Evansville Memorial (Ind.) went undefeated at the event, but in both cases lost out on tiebreakers for group titles.

Penn bounced back from a 2-2 Friday tie with Brunswick (Ohio) with a 2-1 win SIMA FAB 50 No. 26 Notre Dame Academy (Ky.) on Saturday. Brooke VanDyck delivered the winning goal in the closing minutes. Penn’s first goal came from the shoulder of Nicole Knudtson, who redirectly a pass from Maya Lacognato into the net for a 1-0 lead. Notre Dame’s Elizabeth Vandergriff, who has committed to Bellarmine, chipped the Pennkeeper for the equalizer.

Evansville Memorial, formerly a fixture in the elite group, swept [Indianapolis Cathedral in-w] (Ind.) and Marion (Ind.) by a combined 4-0 margin to go 2-0. The team received goals from four players. Memorial lost out on goal differential to Zionsville for the group title.

PLAYERS TO THE DAY

D Lexa Bauer, [Notre Dame Academy oh-w], Jr.: The Toledo commit anchors a strong Notre Dame defense that has yet to surrender a goal this season.

F Haley Dougherty, Simon Kenton, So.: Dougherty scored the second and third goals as Simon Kenton dealt Avon (Ind.) its first loss of the season in a 3-1 contest.

GK: Sarah Stodghill, Sacred Heart Academy, Sr.: One of the smallest players on the field had a big game in the team’s 1-0 victory over Carmel. Although Carmel played a lot of shots right to her, the senior was always in good position to make the save and did not give up rebounds.

D Elizabeth Vandergriff, Notre Dame Academy (Ky.), Sr.: While she scored the team’s only goal in a 2-1 loss to Penn, it was her defensive effort in limiting chances by Florida State commit Kristina Lynch that placed her among the stars of the day.

MF Brooke VanDyck, Penn (Ind.), So.: Pure hustle with great speed and ball skills. VanDyck was the most dynamic player Saturday, and her effort was rewarded in the closing minutes as she netted the game-winner in Penn’s 2-1 victory over Notre Dame Academy.

MF Abigail Zoeller, Simon Kenton, Sr..: The Xavier commit was instant impact in a showdown with Avon, scoring the first goal and assisting on another.