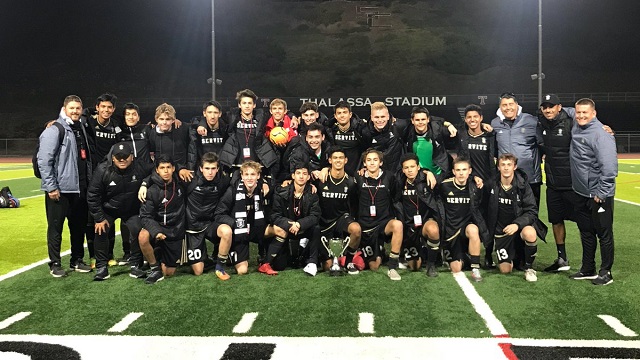 SAN CLEMENTE, Calif. -- When asked if the first half against Auburndale (Fla.) was the best 40 minutes Servite (Calif.) has played early this season, Servite coach Jon Spencer was quick to answer.

"That was the best 120 minutes," he said with a laugh. "Something just clicked."

"I think the Paramount match was important to us," Spencer said, referring to the team's semifinal match. "It got our guy's attention. We showed a commitment to pressure and defense."

And with that, came offense.

First, a pair of second-half goals to win Friday's match over Paramount 3-1 after the match was tied at 1 at halftime.

Then, goals in bunches Saturday -- three in the first half and two in the second as FAB 50 No. 5 Servite, the highest-ranked team at the event, humbled previously undefeated and No. 25 Auburndale.

Fuller got things started with a nifty left-footed flick for a 1-0 lead early. Alex La Brie cashed in a Brett Lux service after the ball bounced around in the box. Not long after, junior Zuriel Silva added a goal to make it 3-0. The shellshocked Auburndale team didn't have an answer for Servites size, speed and quality.

Fuller capitalized on a defensive miscue with 19 minutes left and Kyle Pearce capped the scoring less than five minutes later.

Blake Bowen scored the first and third goals and Liam Linas had one in between for the Tritons.

FIFTH PLACE: St. Paul's (La.) 3, Buchanan (Calif.) 0: St. Paul's went through the three-game event without allowing a goal, yet finished as the fifth-place team. The Wolves fell in penalty kicks in the opener following a scoreless tie and followed that with shutout wins over Watsonville and Buchanan.

St. Paul's was in control for large stretches of the match and received goals from James Bryant, Justin Savoie and Jack Bonaldi.

Kyle Schmitt, who played all but about 10 seconds in goal during the tournament, recorded the shutout.

The past two years Watsonville has entered national tournaments with undefeated records only to end up in the seventh-place contests. The

Wildcatz seemed headed for another eight-place finish as Corona del Sol create plenty of scoring chances. But early in the second half, Herrera broke the scoreless match with his first goal.

F Cade Fuller, Servite (Calif.), Jr.: Big, strong, fast with good touch. Fuller scored twice in Saturday's final and both times outrunning defenders, once slotting a nice left-footed shot into the far post side netting; the other a tap-in following a defensive miscue.

F Alex Gonzalez, Watsonville (Calif.), Sr.: Gonzalez makes a lot happen for Watsonville, thanks to his speed. He dropped back into more of a midfielder role and that helped generate more offense for the team.

M/D Koosha Jadbabaei, San Clemente (Calif.), Jr.: Jadbabaei, usually a defender, was moved up to bolster the Tritons' the midfield.

M/D Liam Linas, San Clemente (Calif.), Jr.: Linas is usually a right back, but was pushed forward to right midfield and proved very productive. His efforts were rewarded with a goal early in the second half.

M Tristan Weber, San Clemente (Calif.), Sr.: The Portland commit commands so much attention that he makes the game easier for his teammates. His free kicks are always on point and dangerous.

D Mitchell Carpenter, Corona del Sol (Ariz.), Sr.: Carpenter pushed up into the offense and provided a lot of energy in the team's attack.

D Alex La Brie, Servite (Calif.), Sr.: La Brie was part of a lock-down defense that helped Servite shut out Auburndale. For good measure, La Brie got involved in the attack, scoring the team's second goal in a 5-0 win.

D Corbin Mercado, Servite (Calif.), Sr.: The Loyola Marymount commit was his usual dominating self, active on both the offensive and defensive ends of the ball.

D Austin Roberts, Buchanan (Calif.), Sr.: Roberts is great in the air and has exceptional speed. Buchanan asks a lot of this player, from defending to getting involved in the attack.

GK Kyle Schmitt, St. Paul's (La.), Sr.: Schmitt posted his third shutout of the tournament and the senior keeper has yet to allow a goal this season. He was not put under much pressure Saturday, but still was in complete control.